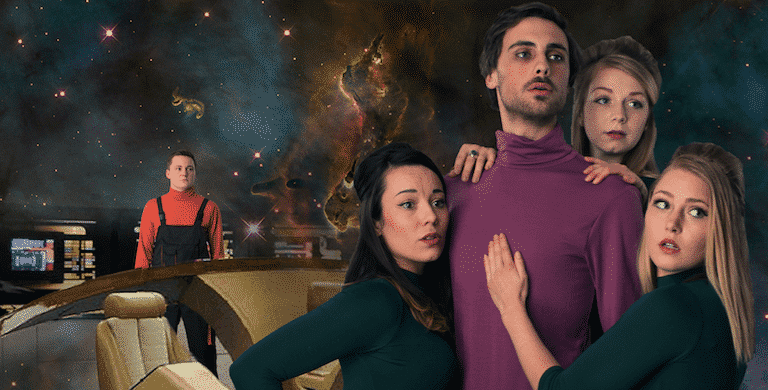 The comedy of catastrophe is a very British pleasure (Brexit anyone?). The same is true in theatre and Willis & Vere: The Starship Osiris is riding that particularly muddy wave, bringing this 5-star Edinburgh Fringe show to the Soho theatre.

We follow the egotistical, utterly dislikeable Captain Hamilton, played by George Vere, as he bullies, demeans and embarrasses not only his resentful cast and crew, but also the audience, in this sci-fi parody. A classic play-within-a-play that devolves into delectable chaos, the concept is sound and very enjoyable, and despite the show hitting some unforeseen trials, the overall effect is very funny.

One of the problems staged chaos can hit is audience participation and interaction. As the “cast/crew” mutiny from the despotic leader’s comically dreadful ego-stroking Star Trek-like narrative, they invite the audience to interact with the action by breaking the fourth wall. On this particular night, the audience were particularly forthcoming, and this seemed to spook the cast a little. Battling suggested plot changes and audience members with a chip on their shoulder is tough, but in a piece that openly invites this kind of comic interplay it is to be expected. Throwing the cast off their game creates the sort of unstructured chaos that can be uncomfortable to witness. This only lasts for a short section, but it stands out because of the surrounding work’s high calibre.

But back to brighter horizons. Utilizing dreadful projection skills, rubbish props and a monster made from interconnecting tents, this show is joyfully silly. For lovers and/or haters of sci-fi, this bundles together all the toxic masculinity of the genre and manages to personify it in the lead character. Vere is the unskilled but confident actor/director/writer that I imagine we have all met, who has comic timing to perfection. His inability to sing and his constantly changing accents, captain’s log style mannerisms, along with his frankly dreadful writing ability contribute to the show being a hilarious journey through this man’s ludicrous personality. Abusing all who come close in his quest for a 5-star review, he finally pushes his cast too far. The uprising, spearheaded by the downtrodden Evans, played by Adam Willis, is as explosive as it is cathartic. Lola Claire, as the wonderfully two-dimensional space vixen Trixie, also provides the needed comic sense to convince the audience of the pandemonium happening on stage.

Perfect late-night comedy, this show is a delight. Although the concept begins to wear a little thin at points, the rug is continually pulled out from under the audience so that the pace is kept fast and flowing. In space, no one can hear you scream, and I guess the same goes for laughter, as The Starship Osiris keeps us all giggling long after its abrupt crash landing.