Tales of the Turntable 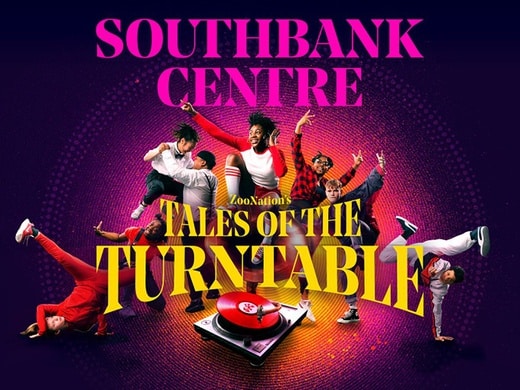 ZooNation crashes into the Southbank Centre’s Queen Elizabeth Hall for a follow up on their 2013 hit show Groove on Down the Road. Tales of the Turntable is an infectious and uplifting piece of hip-hop theatre that showcases the next generation of Britain’s dancers.

Following the heart-warming tale of Eric, bullied and lonely, and his grandfather’s time-travelling record player that allows them to explore the history of dance along with their relationship, the plot is simple yet effective. And it’s in the choreography, energy and undiminished talent of the performers that this show shines. Written, directed and choreographed by the talented Carrie-Anne Ingrouille, the fresh, cohesive and imaginative staging and blend of dance styles and shapes are impressive. The show harnesses the never-ending stamina of youth and focuses that into a piece that is as fun as it is visually interesting.

And what stamina! The ZooNation performers, all between 10- and 20-years-old, from all over the country, are undoubtedly the future of dance. Despite the show’s fast pace, costume changes and demanding routines across many genres of dance the whole cast never let up for a minute. Watching them makes you feel tired, but these professionals never allow a second of dipped energy.

Abdul Basit Ayanwusi playing Eric is one to watch in the future with an intensity to his movements that is awe-inspiring. Sashshana Wade playing Eric’s only friend also has a magical presence physically. William Pascua, playing Eric’s grandpa (along with being dance captain) brings a nice comedic touch to the show. All this is imparted without any spoken lines, with a voiceover to hint at the narrative. There is a very high level of ability in physical story-telling here. The rest of the cast show such a level of determination, professionalism and dance skill that picking anyone at random would provide you with a rising star.

A thumping soundtrack by DJ Walde coupled with a clever, space-age set by Jacob Hughes brings this slick affair out of the realms of most childrens’ theatre. At times I find the genre a little insipid, but ZooNation proves that investing in and highlighting the future of a field is not only important but can also create an interesting piece of work. With feet a-tapping and hips a-swaying the audience pile out into the hot Thursday night, with smiles on their faces and music in their hearts.