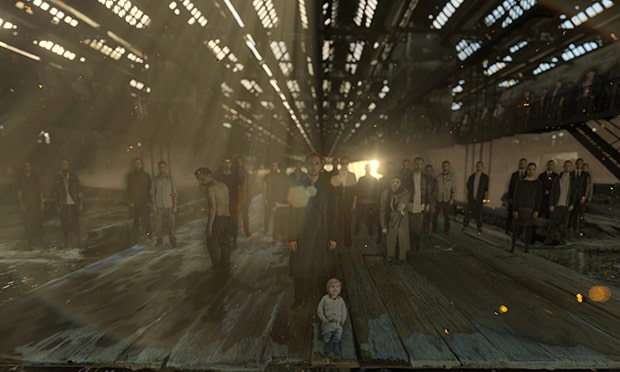 Like Creation Theatre’s production of The Tempest, TOM is a piece crafted more recently, and as such has an important and modern message of hope for the arts.

The journey started in 2018 and, as Wilkie Branson explains in a monologue to the camera at the start, this is a dance-for-camera installation.

Although it’s not live, the piece is bursting with clever and creative ways around the problems brought on by coronavirus.

We are welcomed into Branson’s lonely world of unfeeling cities and empty countrysides. Trains race through lakes, and packed tube stations give us a world like our own but digitised. It’s a little like Grand Theft Auto, only with more culture and fewer guns, and the whole thing feels like a Gorillaz music video.

The vast majority of TOM has been created by digitising over 100 handmade models using photogrammetry. Just inputting the data took around nine months, with a quarter of a million photographs processed.

At the start and end of the piece, we see the garage with the green screen and the tiny intricate models.

At the beginning, this blurs out into a gloriously pastoral view, showing the true artistry of digital creation that is possible at present.

Brandon dances most of the 400 characters, but his three-year-old nephew Eben Haywood – rising star? – also joins the cast.

The lack of a large cast is not avoided but celebrated. The crowd scenes of Brandon’s clones are especially creepy, as in different costumes his face stares back at the camera, deadpan.

Along with sumptuous digital wizardry (can you tell I’m well versed in IT lingo?), we have a lovely scribbling effect over the humans, making them look like they are constantly being animated – this again adds to the surreal nature of the piece as a whole.

In a scene on a train, we suddenly realise they are two-dimensional in a 3D world. Rug. Pulled. Out.

Technically, this is a dance piece and Branson’s chorography can sometimes be overly simplistic, but with the other effects buzzing around his many bodies, it seems like a clever choice so as to not overload the performance.

His B-boy and break-dance section in an abandoned warehouse, with a crowd of himselves watching, is a high point.

With a soundtrack crafted by Benji Bower and sound by Mat Clark, every section builds to a stunning techno crescendo.

Dealing with loneliness, suicide, and growing up, this wonderful piece is emotional as it is complex.

Sections in which Branson dances with his childhood self (played by Haywood), and the way the projections glide along the floor like video game characters, are incredibly novel.

With thousands already having watched, it is clear people are starved for art that reflects their feelings at this time – loneliness, depression, and isolation. That’s why I love the stage so much – it has such an ability to consume and create in the face of anything.

Wilkie Branson and dramaturg Adam Peck have created something unique, and I hope many more will follow in their footsteps, and when we all finally re-emerge into the sunshine together, I pray this art form continues to thrive.