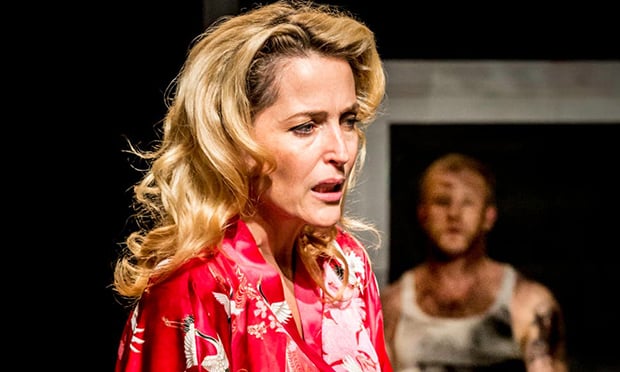 “Fasten your seatbelts, it’s going to be a bumpy ride.” All About Eve, anyone?

Arguably William’s most famous work, the claustrophobic story follows the distraught Blanche (played by Gillian Anderson) as she takes refuge from the lost family estate in her sister Stella’s (Vanessa Kirby) tiny apartment.

Battling drink, mental illness and penury, the clashes with the hard form of Stella’s husband Stanley (Ben Foster) comprise much of the action.

Following in the footsteps of Vivian Lee’s Blanche and Marlon Brando’s Staanley, these are big boots to fill.

This Pulitzer Prize-winning play is astounding if approached correctly, because with seemingly never-ending dialogue, it can lose an audience.

For Anderson, this is the performance of a lifetime. Constantly talking, simpering, flirting, rising and falling in energy and emotion, Blanche is one of the literary world’s most sumptuous yet demanding characters.

Filled with southern charm, embittered by life’s disappointments, her drunken rambling and slow spin into madness is legendary.

The tightrope walk between her delusions, refined upbringing, and coquettishness, and the undercurrent of her urges and past, is enigmatically written and performed in this piece.

Anderson clutches us to her, pulling us into her world of shattered dreams and sinister realities. She brings credibility to a character that could come across as fanatical and breaks our hearts repeatedly.

Foster as Stanley is every inch the brute – conflicted, at times loving, yet tyrannical. If you want a man to hate, he’s the one!

Nevertheless, Foster perseveres to give depth to what can sometimes be a two-dimensional villain.

Kirby tries her best to stay afloat in this sea of big performances, and does it well, but the part is always placed uncomfortably between Blanche and Stanley. A facilitator ripped apart in the crossfire.

Overall, the cast is strong but they serve as background noise to the triptych battle raging on stage.

Victoria Behr’s costumes keep the 40s and 50s feel without slipping into histrionics.

Some subtle modernisations from these two creatives update the piece without losing its quintessential charm – if charm is the right word for gut-wrenching sadness.

But it’s Benedict Andrews’ direction, Jon Clark’s lights, Paul Arditti’s sound and Alex Baranowski’s musical choices where the most glaring reinventions begin. Together, a horror-style cinematic quality is brought to the piece.

The sex and seediness of the rough part of New Orleans is created with bursts of live, discordant jazz.

Set changes are in hard, block colours of reds and greens, with rocky soundtracks blaring out.

The battling dialogue and spurts of violence are mirrored in the set changes and this use of traditionally wasted time is a real gift. It creates a thoroughly modern yet true-to-form view of this oft-repeated play.

An unmentionable number of moments ram home the misery and beauty at the heart of William’s work, and the constant obsession with something lost and rotting are ever-present.

The moment when all Blanche’s lies and illusions are shattered, and her perfect hair is washed and wetted, genuinely brought me to tears on my sofa.

Everything in this production sharpens the stake that Anderson then rams home at the climax.

As Cat Power’s cover of Troubled Waters laments the world, Blanche is led away like a funeral march, broken. We are impaled by this piece.

A bumpy and glorious ride indeed, but one best not embarked on if you’re not in the mood for a fiery crash.