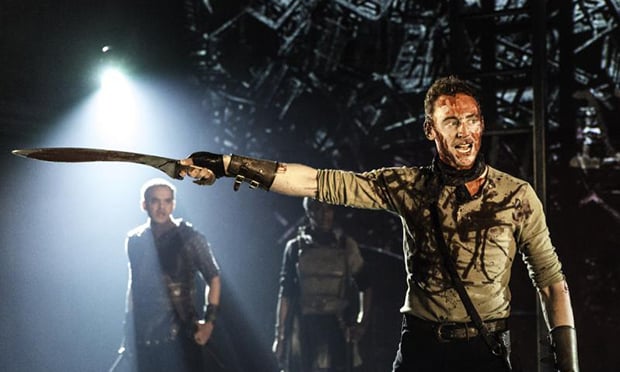 No matter how much imagination you pour into the vessel, the cracks are almost always visible.

Unless you’re a fan of the minutiae of 5th-century Roman politics – and I can’t say I am – Caius Marcius Coriolanus may be new to you.

Dear old Will dramatises the life of this proud general, from his unprecedented rise to his subsequent, if rather predictable, fall from power.

The play can be summed up in one quote: “You are too absolute.” So there you have it, no need for any more conversation, goodnight!

Tom Hiddleston is the aristocratic and unbendable protagonist – his performance stern, layered and impressive, wolf-like and clear.

The rest of the star-studded cast are equally deserving of praise.

Mark Gatiss playing the senator Menenius is as close as the play gets to comic relief and lightens the blood-soaked drama immensely (thank goodness).

Helen Schlesinger and Elliot Levey bring up the vanguard as silver-tongued tribunes.

Josie Rourke’s directing brings many shades out of the cast and is equally gritty and deft.

The set at the Donmar is limited, and the choice of keeping it bare, with a brick wall at the back and a reliance on thin potable set pieces and projection, is understood if a bit underwhelming.

Lucy Osborne’s choices fail at times to conjure up the world of ancient Rome, or another recontextusied one. The senate scenes feel more like a local village’s council meetings. The effect is vaguely ancient and vaguely modern, with admittedly nice use of colour.

Osborne’s costumes again are semi-modern, which does sometimes produce a blended aesthetic but doesn’t quite work is this piece. Nevertheless, the layered leather jerkins are things of beauty.

Battles are devilishly hard to create in a small space and all the tricks of the trade are pulled out of the hat, to some avail.

The fight choreography of Richard Ryan is swift and brutal and one of the highlights of a play which spends most of the time throwing its characters into sword fights with one another. But the cramped space and lack of theatrical signposts makes for a forgettable physical sense.

Literary scholar A. C. Bradley once said that this play is “built on the grand scale”, but it’s the grandness that is lacking in this production.

There is blood, anger, pride and the eventual catharsis within the play – and in this rendition, famous actors, punchy action and political turmoil.

The disconnect is somewhere deeper within the piece and maybe – hear me out – down to the bard himself.

Is perhaps Coriolanus the male counterpart to Cymbeline? If you haven’t seen the latter, be warned.

The issue stems from Coriolanus himself, the quintessential posh mummy’s boy. Unlike the other tortured heroes of Shakespeare plays, such as Cleopatra, Hamlet, Lear, we get no window into the soul of this deeply flawed human.

The character is unprotected from the cruel winds of fate and audience apathy. The pain and bloodshed caused by his shocking lack of self-control and militarism is a nice warning on the evils of male arrogance, but at over three hours long, the stony armour of the character becomes a seawall that we beat ourselves against, without ever producing a crack.