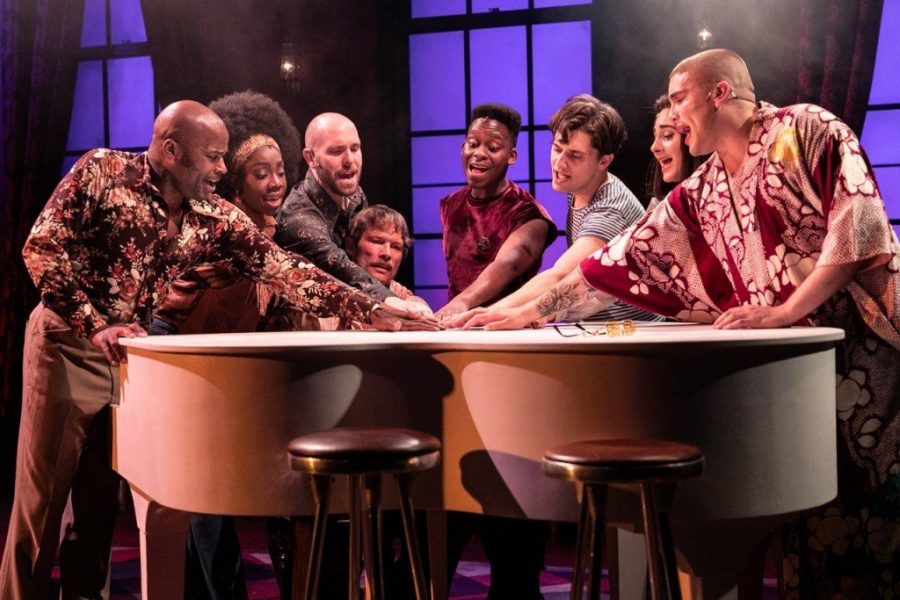 Be sure to have plenty of tissues at the ready as the European premiere of Max Vernon’s Musical The View Upstairs sashays into the Soho Theatre. Heart-wrenching and perfectly situated in the centre of queer London, this musical entertains, disrupts and challenges.

Set in 1973 in the Upstairs Lounge, New Orleans, the show blends the real and imaginary together to tell the story of the most fatal homophobic hate crime in American history before the 2016 Pulse shooting – the arson and subsequent murder of 32 innocent people.

Taking place entirely in the bar, Lee Newby’s refreshingly naturalistic set requires the piece to rely heavily on Nic Farman’s atmospheric lighting and a deck of knock out performances.

Following Wes (Tyrone Huntley) a shallow, self-hating yet self-made example of modern queerdom, as one “dodgy” line of cocaine sends him back to 1973 (I know time travel and gays? But believe me, it works). Huntley’s voice is outstanding. His vocal ability pours passion and sass into the role and provides a comic lens of dramatic irony. This is his show and he pulls focus understandably. Meeting the bar’s regulars, he discovers a community so different from the ‘perfect’ gay life he has left behind. Falling accidentally in love with Patrick (Andy Mientus), who although not quite matching Huntley’s vocal ability, provides a softer alternative characterisation-wise.

Every other member of the cast excels, working well with the at times challenging 70s/rock ballad score. Inez (Victoria Hamilton-Barritt), the mother of the local drag queen, is stupendous. She not only provides comic relief, but her solo about life’s challenges is touching and this flash of motherly love makes a difference in a story filled with such adversity.

Each performer brings their own colour and life to an already vibrant show, and the effect is uplifting. Willie’s (Cedric Neal) choral rendition of a reconstituted church hymn gives life to all who listen and Buddy’s (John Partridge) rocket-man style performance drives the show along. Add in a rousing drag performance by Freddy (Garry Lee) and a neurotic solo by the outcast Dale (Declan Bennett), vocal-heavy hitting by Henri (Carly Mercedes Dyer) and The View Upstairs begins to take shape.

But this show is more than just a sum of its parts, even if each part fits together so superbly. The piece is grounded both in musical theatre history as much as it is in queer history. Vernon’s songs and lyrics are a glorious blend of Jason Robert Brown and flashes of Hamilton with a modern ‘Mr Cellophane’ moment depicted by Bennett’s solo. This is not just a show with a message, it also works on a practical theatrical level. Sprinkle a heavy dose of wit and some upbeat choreography (Fabian Aloise) and you have a hit!

The real legacy of The View Upstairs is twofold. Firstly, it manages to shine a light on the lives and loves of people who were senselessly killed simply for being themselves. It does this with feeling and tact, never pushing too far. Secondly, it questions both periods of its setting, highlighting the hate-ridden environment of the 70s, but also questioning where the community is now. Wes demonstrates that shift in the issues and perils faced by LGBTQ+ youth beautifully.

One-line sticks with me, as Patrick, questioning Wes’ future states “That’s not Community, that’s commerce”. Any show that takes on the contradictions of past and present with such glamour, pain and subtlety is a winner in my book, and I hope you mince on down to Soho and find out for yourself!