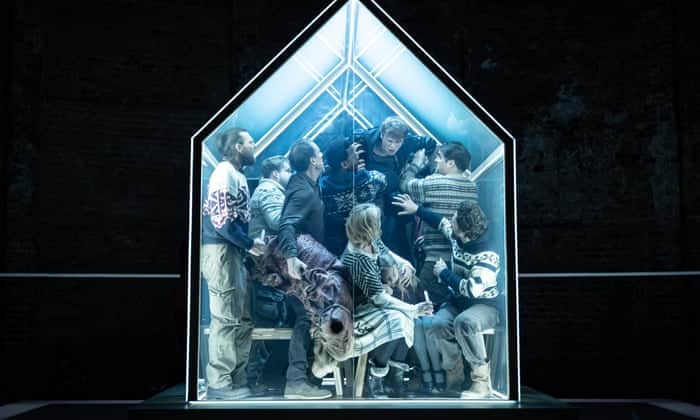 Dark, gritty, bleak…but that’s what is expected from the stage adaptation of Thomas Vinterberg’s Danish film drama (starring Mads Mikkelsen). What isn’t expected, is a touching, surprisingly human side that the stage adaptation brings to the tale of mob mentality and small-town prejudice. In direct opposition to the Danish idea of Hygge (cosiness), this play keeps you on the edge of your seat from start to finish.

What an adaptation! Almost faultless, slick and clever this story follows the mild-mannered primary school teacher Lucas (Tobias Menzies) in a tale of miscommunication, “innocence” and false accusations of pedophilia. With some outstanding performances, the only disconnects are some rather uncomfortable (I assume) translated songs which don’t quite hit the mark and a confusing Scottish accent from the lead characters son. Two small easily forgotten thorns in this critics side!

But where to start. The main draw of this piece is without a doubt Es Devlin’s amazing design and the use of theatrical wizardry that is indistinguishable from magic. The story undergoes a more fairytale twist in this incarnation and the use of a Perspex cabin centre stage that serves as a vanishing cabinet is theatrical gold. The mechanics are forgotten as large mythical deer creatures appear and disappear like phantoms in the woods, and the focus on the importance of ritual is an interesting lens. The clever directing by Rupert Goold really plays with the idea of community and isolation. The choice to have the large scenes squashed into this transparent shed is a stroke of brilliance and effectively creates the tension of a suspicious community. Performance wise of cause Tobias Menzies shines in this mouthful of a role. The teacher accused and brought low by a modern witch hunt Menzies plays the character with every inch of believability, quiet forbearance and dismal heartbreak. This is his show but although he shines the clever theatrical choices around him almost eclipse a very effective performance.

The rest of the cast understand the off-kilter pace of the show and provide the perfect reactions within David Farr’s beautifully written adaptation. Poppy Miller playing the girl in questions mother burns with visible parental doubt and anger. Justin Salinger, her husband is striking as both Lucas’s best friend and undoing. As someone who on average dislikes children on stage (especially if they are singing) the casting and acting ability of the two children involved is truly remarkable. The understanding of the complexity of the play is impressive and whatever process allowed this to exist must be commended.

The Almeida is a wonderfully flexible space, and the simple use of wood, plastic and strip lighting (like a gothic basement designed by IKEA) transforms the space into a small town in rural Denmark. The costumes and even the phrasing reminds you of its original creation and the questions asked are uncomfortable and important. This show does it all, scandi-noir, horror, social commentary, comedy and reflective surface to our darkest fears. The implicit trust of children and the ability for public opinion to be swayed by emotion are stark reminders of the danger’s society can bring. A tale that reminds you why you love theatre and maybe hate people we see the very best and very worst in this dive into the dark woods of human thought. In the great tradition of plays improving on films, The Hunt keeps all the gloom and moral thrashing but provides a more surreal, artistic look at the story and is both unrelenting and unprecedented. If that’s not enough for you there are 8 men is speedos in a cabin covered in water, sold yet?