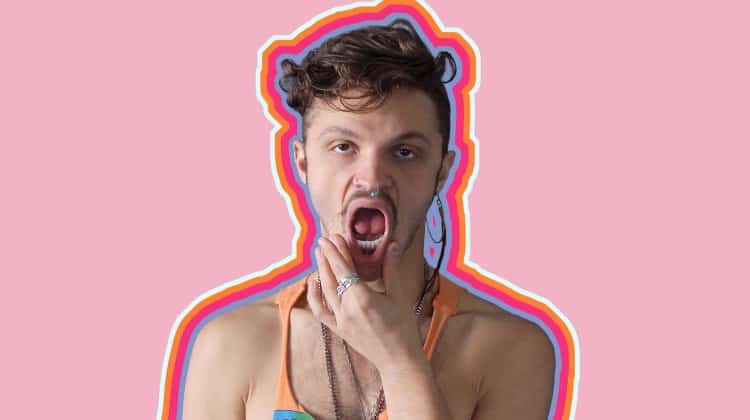 Deliciously devilish, irrepressibly irreverent, Woody Shticks entertains, astounds and glistens in his new one-man show Schlong Song. As expected at the King’s Head Theatre, there is more than just a queer undertone in this production and this is its best asset.

Covered in glitter, sporting (and, shockingly, pulling off) a majestic mullet, Shticks takes us on a no-holds-barred journey through his sexual history. Any sensitivity for British prudishness is left far behind by this brave American, as he dominates the stage in a gloriously self-indulgent but important romp. It goes without saying that unless you want to induce a heart attack, this isn’t the show to take your reserved aunt to, but hopefully, you picked that up from the title.

The main obstacles which single-performer shows encounter are differentiating the piece from stand-up, justifying its theatricality and breaking up the inevitable lag of energy that comes from watching one person talk for an hour uninterrupted. Shticks does this well with razor-sharp writing, charisma and lap dance sections but some of the tech that he relies on to sequence these are slightly sloppy. Overall, the flow of the show could be improved. Lisa Barry’s lighting is effective at changing the pace at points and engaging us but nevertheless, the show does drag (no pun intended) towards the end. Although we are uplifted by the message and the delivery, some tightening up could really help the show to reach its optimum capacity.

Mixing dance, full-frontal nudity, and non-stop comedy, Shticks manages to cleverly confront issues that face LGBTQ+ people and their sexual development especially. As everyone knows, shame and sex are a heady combination and Schlong Song manages to openly and refreshingly speak about issues that normally cause many of us to cringe. To watch this is a liberating and almost cathartic experience. This strange, loud, sassy, almost mythical being cavorts about the small Kings Head Theatre, revelling in the taboo and somehow making it less so. Despite being a deeply personal show touching on hate, family and prejudice, it speaks to everyone who has ever felt lust.

The real charm of this show is in its sex-positive, anti-slut-shaming message, which even within the supposedly liberal queer community, can sometimes get lost under the sheets of unthinking prejudice. Shticks gleefully removes these sheets in his gem of a show, proving that everyone is equally as depraved as one another and causing the audience to cry with laughter in the process.