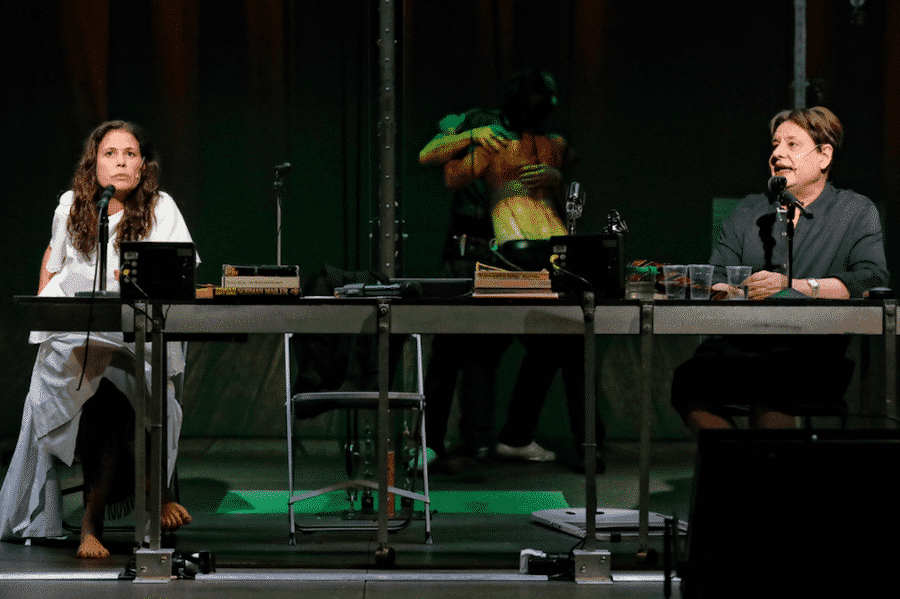 And I quote “The future is just assholes talking to assholes”, and isn’t that the truth? The Wooster Group’s production of The Town Hall Affair delves into the farcical, chaotic, intellectual bloodbath that was the 1971 “A dialogue on women’s liberation” debate at the town hall in New York. A time capsule of dreadful opinions, horrific sexism and “assholeishness” is dissected and explored in the production. We see the very worst and (in my opinion) the very best of some of the big players in the 70s political/social sphere and gain a glimpse into a world far removed but scarily close to our own.

But let’s get down to the nitty-gritty, as a drama student studying on an experimental course, The Wooster Group are God, referenced, talked about, considered the start and end of the theatre revolution. So maybe seeing them for the first time I had my hopes set unusually high? Although they were not dashed to pieces on rocks of disappointment, they certainly were not met. This is a very strangely specific piece about a rather unknown (in England) conference in the 1970s, there is no attempt to contextualise it and for better or worse, this is left to the more mentally active audience member. Leaving the subject matter to one side (for now), it is a rather bland show. A heavy reliance on multimedia and a specific documentary (Town Bloody Hall) should have produced a stellar show, but I was left feeling like it would have been quicker, cheaper and easier to have seen the original documentary. Using Multimedia is meant to modernise, and give new life to the stale form of theatre we all know but it this case it felt a tad lazy and unimaginative. Although we did get the signature surreal, unpolished charm of The Wooster Group, it just wasn’t at the level I expected it to be, and left me feeling deflated and a little undersold. Yes this is postmodern, yes it is political, but I have seen better from a recently graduated actor in The Vaults in Waterloo for a fiver. It just didn’t shine, or zip, and didn’t have the masterfulness that a company that has been around as long as their subject matter should have; it was good, but not nearly good enough.

I do realise that above is quite a damning set of points and I won’t backpedal, but one of the shows only saving graces is their choice of subject matter. This glimpse into the ideas flowing around in the 70s is very shocking, and this is for two fascinating reasons. One is the leaps and bounds we have come forward in the last 30 years. I am by NO means saying we are out of the woods, equal or in a time without sexism (far from it), but I think it’s easy (for people of my generation especially) to forget quite how bad it was in the past. The causal and patronising tone, dismissive and hateful views galore chairman Norman Mailer, is as repulsive as he is comic. This was quite a shock for me, just watching the way in which Mailer threw out hurtful and hateful ideas as if they were nothing. This brutal example of the past is refreshing and I think needed in a world where at times it feels like all the good work of the women’s lib movement is being slowly eroded. Yes, we still must fight but there has been a profound and lasting change and this show highlighted that!

Secondly, and this might be a point of contention but here goes, it showed Germaine Greer in her element, in the period where she was clever, young and at the very heart of the dialogue on equality. This was far more fascinating again considering how many in my generation view her today. The contrast is highlighted by the sections The Wooster Group chose to show, they pick a wonderful moment where Greer is asked if she thinks women’s lib and gay lib are compatible she goes on a scintillating reply saying they are all part of the same movement. This in contrast to her current statements on Trans Women and very interesting to compare and contrast. For these reasons, I thank The Wooster Group for the insight into the changes age can bring, and how falling from your pedestal can land you straight into the camp you used to hate. The subject matter was fascinating for anyone interested in the growth of women’s rights and the political climate of the 70s but this was by no means the best performance to showcase that, and felt sluggish and pale.

But enough of my own personal political wrangling, we are talking about theatre, THEATRE. Although can you really separate the two? I will stop now. Would I recommend this play? It does start an interesting dialogue but is rather heavy-handed, and of limited scope, they always say never meet your idols and maybe I am suffering from that now. This play is as interesting politically as it is uninteresting theatrically. The Wooster Group is coasting on their prestigious name and the wonderful subject matter they are working with. Maybe a little like Greer they have slipped from the pedestal they occupied over the last 30 years, but again similarly this is a choice, a choice to be lazy, a choice to not evolve with the times, a choice to play it safe, and one hopes that The Wooster Group aren’t left behind quite as unceremoniously.

The Town Hall Affair is playing at The Barbican