Isadora, I Dance What I Am 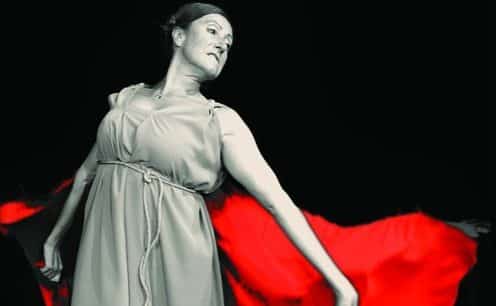 “Love and art, can they ever exist together?” and what a question! So on a very warm Sunday, we sit down to answer it (apparently), and to delve into the life of infamous Isadora Duncan, the mother of dance! What follows should have been a fascinating insight into a complex and revolutionary woman, but frankly wasn’t.

But let’s not get ahead of ourselves, I shall start with some of the brighter moments of the show, (and it wasn’t completely lacking in them.) The subject matter is wonderful, Isadora’s battles with the world, her tragic love affairs, revolutionary politics and her strange death (don’t wear silk scarves in open-top cars kids) are pure theatrical gold. For anyone interested in dance history, this piece gives a small insight into the changes that were happening in 1900 when it comes to the development of other forms of dance other than classical ballet. This was interesting but unfortunately not fleshed out enough and ultimately lost in the rest of the pieces confusion. There are also moments early on with Elizabeth Blake (playing Isadora) where we see real beauty, natural and unaffected, we understand why Duncan was so hated by the press and the ballet world and why she deserved her title the mother of dance, Blake dances at times with strength and conviction but these moments are fleeting, and exist uneasily within the rest of the chaos that is the production.

But what constitutes theatrical chaos? What are the reasons this show, with it all wonderful subject matter falls short of a riveting biopic? Firstly it is badly written. This is Blake’s writing debut after years of a successful dancing career and in all honesty, it might be better for her to stick to the dancing. The text is unrealistic, melodramatic and over symbolic, leaving the audience unconnected with the characters and bewildered at the breakneck (no pun intended) speed in which we hurtle through this wonderful woman’s life. There seems to be no real focus on why we see seeing different sections. Furthermore, when dramatising the life of such a free bohemian, to frame her life through the men she met is simply reductive. Blake is unconvincing as Isadora, and her co-star Neizan F. Birchwood’s accents change like the winds. Neither of them excels in this performance and that is down to a poorly written text, over-ambitious and a lazy piece and just bad acting. One simply drawn poster in sharpie and rail of clothes does not the 1900s make! The show is a lacklustre and unskilled attempt at a very complex subject matter and what could have been fascinating became a simplistic, stereotypical jumble. I quote “what can I say, I love potatoes and young men”, this, as you would imagine landed pretty badly and coupled with the depiction of the Russian poet Sergei Yesenin as a fur hat-wearing Cossack dancing the Hopack, are the two darkest moments of a pretty gloomy attempt at capturing the life of Isadora Duncan.

She was brave, multifaceted, complex, and burning with life. She lived at a time of great change, she fought the traditional world of ballet, and she loved and lost, challenging the world to view things differently. Hers was a life of tragedy and comedy and everything in-between and for the reason listed above this production didn’t even come close to expressing that. If anything it cheapened her life to series of badly articulated and inconsistent flashes which muddied the waters of time when it should have been clearing them. The question can love and art exists remains unanswered and Isadora Duncan seems to fade even further into the past.