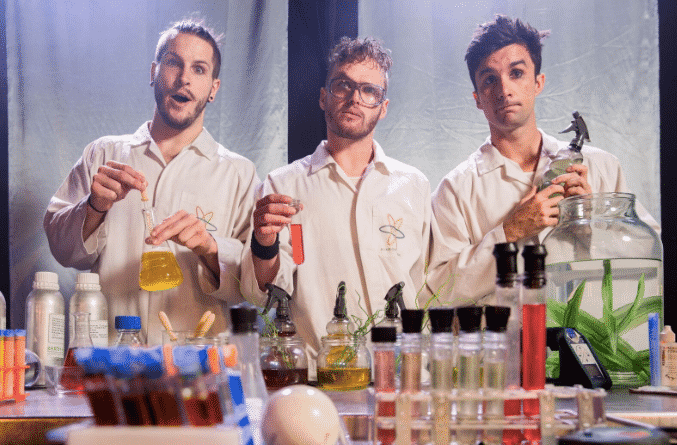 What are the most basic of needs when it comes to the pure, rocking in your chair, silly, beaming grin kind of entertainment? I would say comedy, a touch of sex appeal and a sprinkling of mystery blended lovingly with the potential of certain death! This is what Elixir gives by the tonne full; slapstick mixes with Magic Mike (if the famous strippers grew a sense of humour) and death-defying stunts that keep us on the edge of our seat! Far away are we from the battered touring carnival of yesteryear; this is a circus for the educated elite (who are also fans of a trio of semi-naked men battling gravity in frilly underwear)!

But with every rippling torso, there are small imperfections, and this show is not completely spotless. It’s very funny, and the comic timing is impressive for a group of actors who presumably have quite enough on their hands not dying while mid-air then adding acting on top of that. Having said that the plot was pretty basic (not that in needed to be complex) and the show is about 15 minutes too long, within the research facility of a Resident Evil umbrella corporation style company the doctors go through various physical changes downing potion after potion, hardly War and Peace but infinitely more fun. Also, there are points of slight confusion over whether the actors are silent comic mimes or speaking humans. Although is it billed as a subversive and uninhibited piece, it is hardly revolutionary, but then again, you don’t see many people laughing at Les Mis now do you? Although the show is billed as transforming the gender norms, I feel this a tad overstated, we do however get a nice progressive twist on the very straight and macho idea of acrobat we are used too. These points did not diminish the pure enjoyment of the show, and although I am not snob when it comes to simple un-intellectual comedy, this show must be enjoyed for what it is, a great add on to a night of drinking, a laugh and a wail only slightly classier than a trip to the Chippendales, I was entertained throughout, but maybe don’t take your mother?

If we are going to talk about this style of theatre – musical hall, cabaret, bawdy, riotous and crude – Elixir is at the highest end of the scale, with the mix of truly breath-taking circus skills, truly mouth-watering actors and brilliant comic timing, this show comes out punching. The physical ability of the acrobats is wonderful, and adding a pumping soundtrack to make your ears bleed and a beautiful use of lighting the danger of the stunts is a highlight with so much more skill than your average fairground carny. These men do things with their bodies I didn’t even know was possible, and although their skill is palatable there is just the right amount of genuine worry about their safety! One of the highlights of this show is the general aura and ability of audience manipulation of Rowan Thomas stitching the shows comic thread throughout with real skill. Not only being able to amaze with a variety of circus skills, including the crème de la crème, the cyr ring (Google it right now!) but also being charming and deft with his character Thomas smashes it! Rowan Thomas, Thomas Gorham and Cal Harris blend Aussie humour with physical strength and dexterity with wonderful results. These three flirt, play and frolic their way into the audience’s heart and stay there long into the night. We oohed, we awed and we blushed as the actors dominate the stage with their skill, presence, and charm. This show is hilarious and sexy, and sometimes in a world that can be as bleak as ours, that’s all you need!

Elixir is playing at The Underbelly Festival