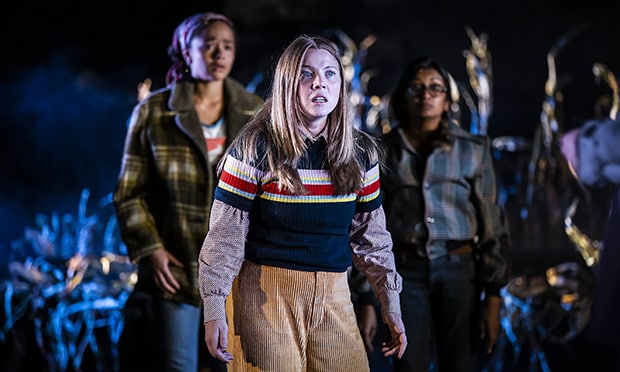 After making the journey down from the Birmingham Repertory Theatre, Bryony Lavery’s tasteful adaptation of Alice Sebold’s bestselling 2002 novel The Lovely Bones proves once again that theatre has a magic like no other medium.

Starting with murder, this play is as hard going and terrifying as the book and film before it, and similarly to those, perseverance pays dividends eventually.

It follows the heartbreaking but ultimately uplifting story of murdered 15-year-old Susie Salmon as she struggles with life after death, and the damage caused by this horrific act on her family and friends.

Melly Still’s inventive use of a large-angled floating mirror gives perspective, along with an ethereal depth and fantastical elements to a piece very much set in two worlds.

Overall the story is slick, stunning and sharp – as thematically gripping as it is visually stimulating.

However, like any complex theatrical device there are moments where viewing the action from above isn’t as effective as it could be, and the closely choreographed chaos can get a little bit cluttered.

Nevertheless, the fading in and out of characters as if surfacing from a silver pool, and the bird’s eye view, allows for a breaking down of the classic sightlines of theatre.

Viewing the living from above provides an insight into Susie’s perspective of being, in her father’s words, “trapped in her own perfect world”.

Charlotte Beaumont is sublime in the title role, never infantilising Susie or allowing her innocence and kindness to grate on the audience.

She is bright, believable and easy to empathise with, treading the tightrope of adults playing children with perfect balance. She is a precious stone in a glittering crown of performances.

Despite the myriad of characters requiring some very talented multi-rolling, the cast steps up to bat with confidence.

Jack Sandle and Catrin Arron, as Susie’s parents, have the audience crumbling in their hands like chalk.

The layered and vulnerable depiction of adult grief offsets the lighter parts of the piece, painting a rich tapestry of humanity as its very worst and best.

With a stylised, almost balletic staging, intuitive lighting and a strong set of performances, the piece could still lack impact if it wasn’t for the mix of comedy and tragedy that is paramount in keeping an audience emotionally engaged.

Such a simple thing as having the dogs in the story played by actors is a great way to break up the misery into easily digestible chunks.

The Lovely Bones, shockingly, is very funny in sections, and this smorgasbord of human experience is its biggest success.

To boil the show down to its most brutal and distressing scene – the rape and murder of Susie – is to misunderstand the layers to the story.

Yes, it is undeniably a story of humanity’s destructive and twisted nature, but it is also about our ability to heal, support and love one another.

This message of hope, even in the darkest times, lives on perhaps even more clearly in this most recent incarnation on stage.

Life in all its shades makes an appearance and that is rare indeed.