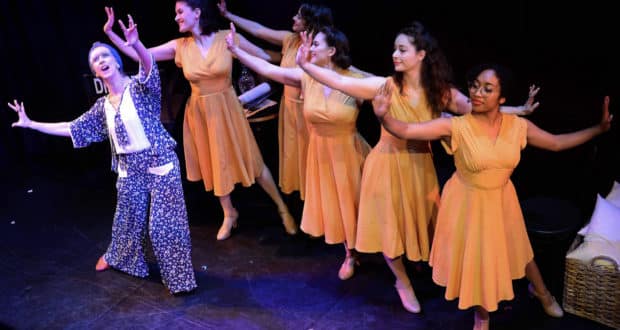 Posed, well-choreographed and chirpy this story delves into the murky depth of the early years of the silver screen but doesn’t manage to clear the waters.

Squished into the studio space of The Other Palace Reputation follows ambitious budding writer Michelle Grant as she fights the comically evil plagiariser and El-Capone knockoff Freddy Larceny (see what they did there with the last name?) who has stolen her novel and made it into a hit film.

No doubt there is talent and effort within the piece. Some lovely choreography from Tamsyn Salter provides the classic teeth and jazz hands glamour that (some) musicals require and keeps the piece ticking along nicely. Uniformly well-acted, Reputation has some stand out performers that do their best with the limited palette provided by the script. Lead Maddy Banks has a clear as spring water voice and is believable (if annoying) as the young ingénue. Jeremy Secomb’s baddy mixes every New York stereotype with a heavy dose of Frank Sinatra and although a touch overdone, he does inject some much-needed comedy. The chorus is slick and organised and versatile with multi-rolling and an imaginative use of costume.

But……no matter how hard the cast strain within this piece the problems run deeper, darker and are unresolved by adding some vocal sparkle or an effective Pirouette. Musicals nowadays are under a lot of pressure to break the mould when it comes to plot and theme. Sadly, Reputation is of that older ilk, desperately trying to bend its storyline to a more modern message. There is an attempt at a pseudo feminism message and although just scraping past the Bechdel the “happily ever after ending” is insipid and problematic. Michelle’s reliance on the men in her life (father, lawyer/lover) and her doe-eyed naivety undermines any overtly feminist message the play tries to make. She (and the female chorus) claim that there is more to life than marriage in one song, and then spend the rest of the piece relentlessly trying to find husbands, referring to them as “knights in shining amour” with a shade of irony to subtle for my ears. This view of Hollywood, the 1930s or even the plight of women fails to bring anything new to the table and come across as simplistic and reductive.

Musically the show is equally middle of the road, the songs are not bad but are over rhymed and worryingly like some classic musical theatre tunes. They do little to differentiate the musical. The rhyming of “Paranoia” with “I’ll destroy her” is a personal favourite. The bones of the show are where the problems lie, and like theatrical arthritis, the problem permeates throughout the whole evening.

The 1930s were a difficult time for female freedom (both creative and personal) and a musical that so glibly deals with such a complex issue is treading on thin ice, made even thinner by our current (and rightful) climate of equality. Reputation is unfortunately just a little out of step with a genre that has thankfully progressed beyond it.