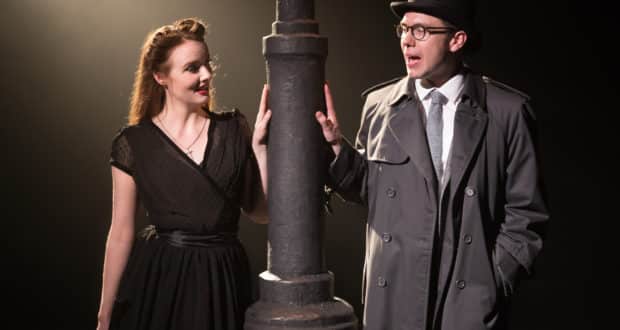 Having only lasted two weeks on Broadway in 2002 Amour has finally moved across the pond to try its luck closer to its French setting, with its London debut at the Charing Cross Theatre. Its hard to work out who to attribute blame to in this stoney production, but with moments of brightness, it isn’t a completely wasted evening.

Following bank clerk Dusoleil (Gary Tushaw), whose lonely existence is transformed by the ability to walk through walls, the story is rather grey but not without some charm. The classic doomed love story, along with the rather overworked themes of breaking barriers and jumping free of convention could (with the right hand) have been crafted into a lovely, rather unusual, off-kilter musical, which it seems is what Amour is attempting. The first barrier to this happening is either Jeremy Sam’s translation from the French original or Didier Van Cauwelaert Lyrics, or maybe both. Sam’s translation flattens any of the Parisian sensibilities out of the story and the stereotypical depiction of the city of light is the equivalent of going to a costume party in a Beret with a string of garlic around your neck. Lines like “my powers were fun to have fun with” pepper the script and create a disconnect for the audience.

The poet and writer Van Cauwelaert is next on the blame train, his lyrical skill amounting pretty much to the ability to rhyme. Now I myself love a good rhyme, being a devoted lover of Dr Seuss but the whimsy and linguistic skill is just lacking here. Rhyming needs to be comfortable, convincing us that it is a natural form of speak. Linking Media with Needs ya is at the level of a 13-year-olds first love poem, not a Tony-nominated musical. Even the great Michel Legrand’s (The Tomas Crown Affair) music isn’t without its problems, coming across as rather rhythmically clumsy and unimaginative. The flow of the show is broken by the overly simplistic music, thus thwarting any possibility of a cohesive show.

Amour does, however, have a few gems hidden within its rather dusty skirts. Visually it is a success, taking the unusual choice within The Charing Cross Theatre of having the piece in traverse. Although this cuts out any use of large set pieces, it does create an interesting challenge for the actors and creative team. Praise must be given to Adrian Gee’s muted costumes and clear colour palette, along with some very clever use of set for different localities. Also, some creative flicks of stylistic skill with lights in umbrellas really made the most of the unusual space, hats off to you Gee for the (I hope conscious) echoing of a René Magritte painting in your vision. Overall to the eyes, the show is rather pleasing, if only the other senses could agree.

Acting-wise there is very little to shout about within the cast, with some strong singers, and some clearly talented comic actors all this potential is squandered by the writing, music, and translation mentioned above. Elissa Churchill stands out vocally and her muti-rolling is a joy to watch, whilst Jack Reitman, the understudy playing the doctor (and the dance captain, busy!) provides a nice injection of comedy.

Both leads (Tushaw and Anna O’ Byrne) try their best within the piece but all the pushing from the actors can’t make this show any less insipid, tired and uninspiring as it already is. If I were you I would spend an extra 100 euros and go visit the statue Le Passe-Muraille in Montmartre (it’s of a man stuck in a wall based on the book), it would be a good deal more exciting.