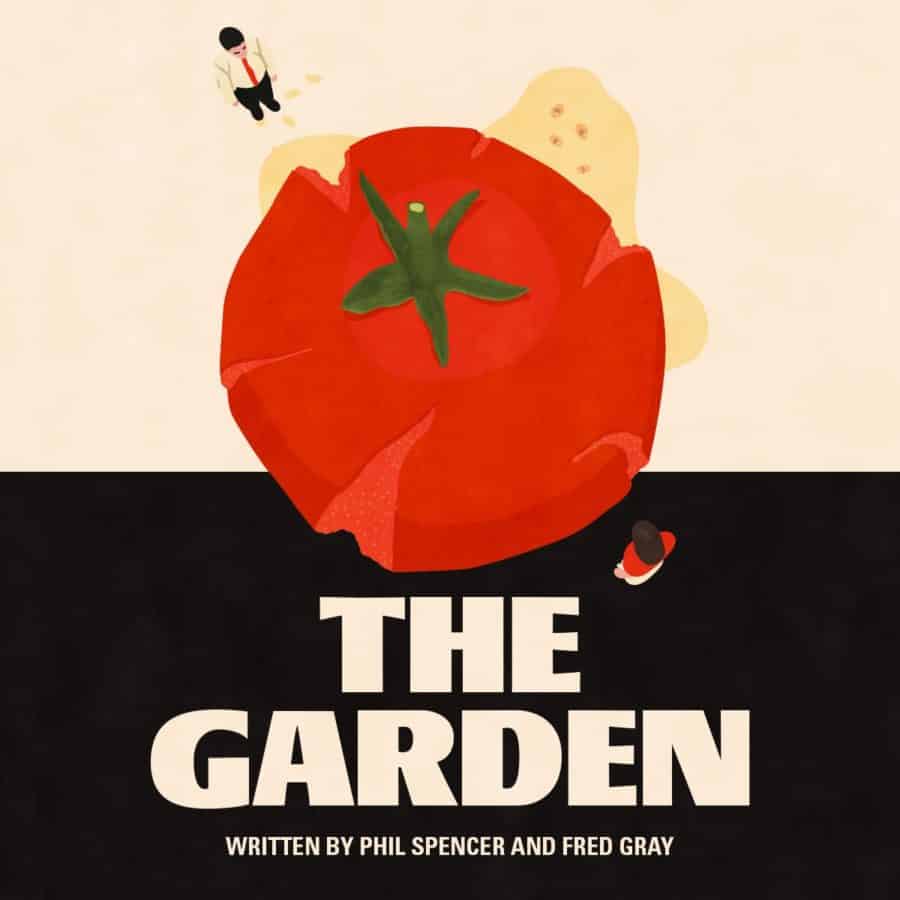 Have you ever wondered what it would be like to be stranded in a garden with someone you find vaguely irritating while only surviving on a diet of onions and temptation? Well look no further, delve into the dark and twisted world of The Garden. In this comic Waiting for Godot style retelling of the story of Adam and Eve, we see Colin and Veronica battle boredom, God, the Devil and one another in a saga about what it means to be alive in a paradise that is surprisingly desolate.

With a wonderfully earthy set strewn with – you’ve guessed it – onions, this play’s snappy writing and outstanding performances play with comedy, both physical and linguistic, and achieve some moments of real clarity. This is a dark two-hander for the more discerning audience members and although it could easily come across as over-intellectualised, the grounding work done by both Jamie Birkett (Veronica) and especially Tom Babbage (Colin) creates a gem of a piece of theatre both profound and amusing. Which is no surprise as both of these actors are currently in the cast of The Play that Goes Wrong in the West End, and it shows, acting pedigree for half the price? Sign me up please!

Babbage’s skill with physical comedy and his endearingly childlike character shines as one of the best parts of this performance and the burning cynicism of Birkett’s Veronica underlines a deeper meaning to piece which works superbly in tandem with the two actors. The plot itself can seem a little shallow and although this is clearly a reworking of a biblical story there were points where this version seems more concerned with making the audience laugh, therefore glossing over certain plot holes. This was a minor issue but coupled with the rather practicable movement from discord to a sort of harmony, the production’s attempt to play with an ancient and controversial part of the Christian canon is very commendable but not perfect.

Where this production really stands out is its writing and the poetic use of language as well as the actors physicality as a means to amuse the audience. A joke on the brutality of the commonly accepted phrase “keep your eyes peeled” by Babbage is one of these moments and the overall questioning of the ludicrousness of the structures we humans create is where this play succeeds. This lightness and curious writing is a credit to both Phil Spencer and Fred Ray. Another more visceral point involves Babbage reluctantly eating a raw onion; he’s a master of comic timing and suspense, although thank goodness for Babbage’s sake it is a relatively short run!

Rocketing between the inherent frustration, tenderness, and loneliness of being stuck forever with a person not of your choice is interesting and although the optimistic ending seems a tad tweet at points, this is a minor pitfall in an otherwise effective performance. The eventual reconciliation between the characters and their understanding of the need for stories in a cold universe is a nice if slightly laboured point. But the attempt to pull some deeper meaning from a comedy is a nice (if a-bit) heavy touch at the end and did throw new light on this religious origin story.

As ‘You are my sunshine’ (recorded by the actors) warbles over the last scene, I was genuinely moved by these two mismatched humans unable too resist the temptation we all fall too, surrounded by dirt and vegetables in the damp, sadly funny world the play created. The poignant skill of the writing and the confidant artistry of the actors blends together in the last scene and I found myself thinking of Rihanna’s uncharacteristically macabre hit ‘We found love in a hopeless place’. This is a story of loneliness and the ability to cope with a world harsher than ever imagined and it has real beauty in it. Although I am not sure if I will ever be able to have eye contact with an onion again.

The Garden played at the Tristian Bates Theatre