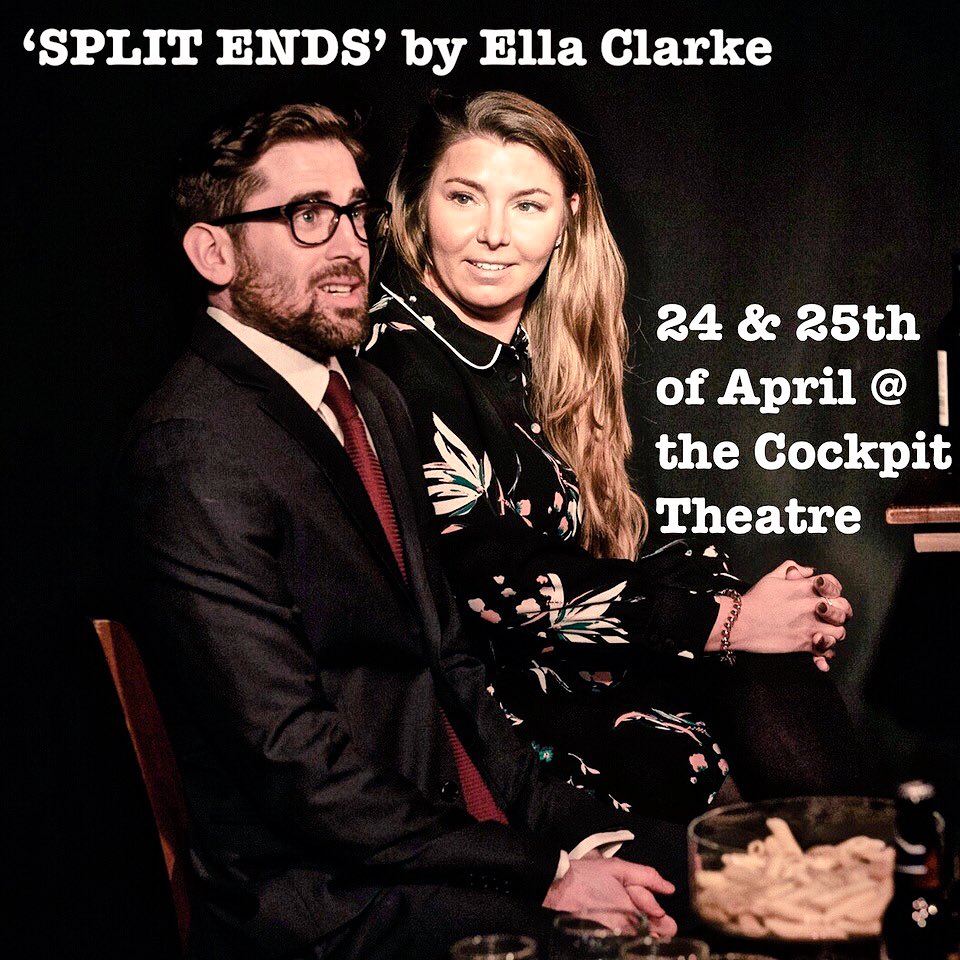 Sometimes a piece of theatre can aim too high, extending its hands out far beyond its actual reach, trying for something admirably complex but ultimately unattainable. Unfortunately, this is Spit Ends, a piece that tries to tread the line between tragedy and comedy, a piece that attempts the Love Actually style fractured storyline, a piece that strains to make the dark and painful relatable through humour. Split Ends tries all of these things, but sadly falls short on almost all counts.

Now for the nitty gritty, The Cockpit Theatre is a large cavernous space and the choice of a bare set really gave the feeling of a school hall. Regrettably, that’s not where the similarities to a GCSE drama piece ended. The music is clearly on a loop and kept cutting out and then restarting, the lighting is a mess and variously props/phones don’t sync up with either what is set or what is planned. This might have been first night jitters, but I think this is a product of the play stretching itself too thin by trying to do too much. The play feels disjointed at times, and at some points makes no sense. Characters words don’t always explain their actions and the mixing of different stories with very little grounding work makes for a confusing viewing. There are unexplained sections of rhyming poetry which come out of nowhere and the actors break the fourth wall with no clear explanation as to why. The style is heightened (melodramatic) naturalism, but suddenly people break into surreal monologues. Additionally, there is a movement piece between two characters in a dreadfully uncomfortable silence, which stands out as both mediocre and unnecessary. This is also true for the use of a projected video that is thrown at the audience then dropped by the wayside. This leaves the audience not only at a loss about what is actually happening in the show, but also about what they are watching and why. The plot has massive holes in it and takes so many twist and turns that the effect of these high impact moments are lost in the scramble. Many of the group scenes feel uncomfortable it is implausible that these are real people in any sense.

Having said that, I would like to focus on the few positive points of the show, firstly as I mentioned before, ambition! This play attempts something very complex, for a large cast with very little set or complex lighting we jump through six years, multiple relationships, locations and a shocking amount of coincidence. Depression, miscarriage, betrayal, failure and lots of lose; it’s all crammed in there! I commend Ella Clarke (the writer, director, actor) for reaching for the stars, as it is not an easy undertaking. There are moments of genuine humour, mainly supplied by Alexander Hulme playing Graham, a failed writer who is recently reunited with his sister. A highlight that shines brightest (maybe because of the surround darkness) is a therapy section with Graham, which is both surreal and very amusing and involves tortoises, which everyone loves right?! One of the only nods to the blurbs mention of Samuel Beckett, this section is a great little moment within the play. Also, Lj Reeves gives us a cynical, and emotionally stunted Rose, Graham’s friends who in a drunken birthday state I am sure we have all embody one year or another ruins her life spectacularly. Her dryness and pace were much needed in the final group scene and pulled the rest of the cast along.

Another possible reason for Split Ends shortcomings could be attributed to Clarke’s not having enough space, being both the writer, director and performing in the piece to really tie everything together. If the god that is Kenneth Branagh can’t manage to give an effective Hercule Poirot while directing/acting in Murder on the Orient Express, I doubt Clarke had much chance in the Cockpit Theatre. Like everything in the show Clark’s high standards and self-belief means that too much is attempted and not enough is achieved.

Split Ends shoots for the stratosphere, but doesn’t quite get off the ground. For Split Endsto triumph every character’s interactions must meld together to form a cohesive story. This takes real skill as a playwright, it takes detailed characterisation, confident contextualising of the setting and wonderful acting. Split Ends attempts all of these but falls into a mess of unbelievable dialogue and bordering on ridiculous coincidence and extreme subject matter. When the chaotic party scene comes lumbering out of the swamp to shock us, the audience is so numb and desensitised that the punch that the scene needs becomes a weak slap. The play is billed as a tragicomedy but to my disappointment it is neither; it is an attempt at something that with the level of the writing, directing and acting is out of the productions grasp. I hate to be negative about a play but I have never written the word WHY in my notebook more while watching a show. Split Ends leaves me with more questions than answers and not in a good way.