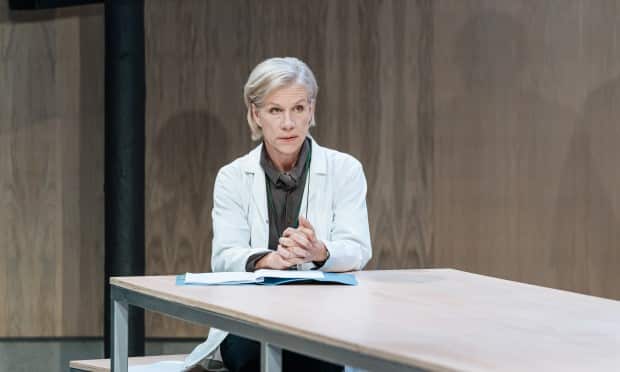 Robert Icke waves goodbye to the Almeida with The Doctor, his last production as the theatre’s associate director.

Following such triumphs as Hamlet and Mary Stuart, this should be a challenge but the brave (and very free) adaptation of Arthur Schnitzler’s play Professor Bernhardi allows Juliet Stevenson’s acting and Icke’s directorial talent to dazzle us once again.

Similar to his irreverent production of The Wild Duck, the story is not such much upended as expanded and the thorny issues of best medical practice and political correctness swirl with the same potency.

The gender and sexuality of the lead is switched and the inclusion of people from a wide range of minority groups modernises the play so effectively that it feels like it was written for the current time.

The play follows the aftermath of a decision by Professor Wolff to bar a catholic priest from performing the last sacraments on a patient of unknown religious belief.

Its questioning of the roles of religion, race, sexuality and personal choice within medicine and life is outstanding.

Icke’s ability to create a reality both stylish and empathetic is unparalleled. The stage is bare, wooden and expansive, like a conference room.

A slick dance of action is built for the actors to breathe life into. The genius of this play, however, starts even before the actors begin.

Icke and Julia Horan’s choice of casting is not without risk-free.

As a play concerned with identity, biography and heritage, The Doctor has blind or nontraditional casting.

The 2012 film adaptation of David Mitchell’s Cloud Atlas attempted something similar and received a heavy backlash for it.

This is refreshingly clever as not only does it keep the audience on their feet, but it further complicates the issues at hand within the play.

I think this decision not only highlights the original points of the play but brings it out of its early 19th-century Austrian setting and into the harsh light of the modern world.

The tension is built painstakingly throughout to a terrifying crescendo at the end of the piece.

Creative choices aside, this play overflows with passionate performances from almost everyone involved.

Stevenson’s depiction of the confident, precise, powerful Wolff and her subsequent unravelling is exceptional.

The rest of the cast keep pace and the intensity is palatable.

Ria Zmitrowicz’s sensitive and humorous portrayal of a teen in transition shows a heap of potential.

Across the board, the calibre is very high and with the surrounding creative decisions, this play doesn’t have an Achilles heel.

The Doctor is a unique piece of theatre in its ability to debate without over-moralising.

The synergy between Schnitzler’s thematic framework and Icke’s modern eye creates an almost surgical ability to cut through the complexities and controversies of modern life.

The conflict between ‘us’ and ‘them’ is touched on, along with heartbreak, Alzheimer’s, loneliness and power.

Stevenson will break your heart and Icke will ensure it never really heals as this piece unravels more and more, dealing damage to all involved.

The most important role of theatre for me is the ability to change its viewer, and I defy anyone to watch The Doctor and come out unscathed.

The Doctor runs until 28 September at Almeida Theatre