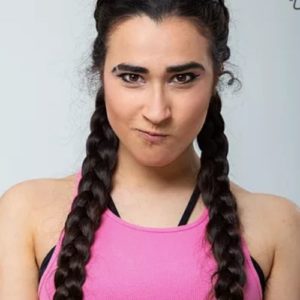 Oddball is undoubtedly an ambitious task undertaken by Francesca Forristal (writer and solo performer) and Micha Mirto (director) bravely trying to make a musical comedy about Forristal’s experience with anorexia. It is personal, complex, and unfortunately disconnected.

We follow Oddball as she tries to get ready for a date but most of her swirling thought processes concern having to cope with being in a restaurant surrounded by food. Unfortunately, though, the fundamentals of the show just don’t turn out to make sense and, believe me, I wish they did.

Although the concept of staging an insight into the mind of someone who has severe mental health issues is important, you must provide some framework for the audience to follow. This piece seems as if barely connected sections of comedy (some effective, some not) and singing have been strung together around a very loose premise and a character comic.

Nevertheless, there are moments of hilarity, Forristal has an impressive amount of energy, and although her style is a little melodramatic for my taste, she does have an ability to create characters very quickly. A Rolodex of her past dates is a lovely moment, and although the plot needs some tightening Forristal’s writing is clever and very quick at points.

This show just takes too much on and ends up doing nothing to a very high standard. There are parody sections of well-known musicals that don’t follow the original tunes, and sections of stand-up that are brilliant but disconnected to the character we are meant to be following. This is a deeply personal view of an eating disorder, but it comes across at points as slightly tasteless. Some sections are almost tone-deaf, such as a rap section that had a lot of the audience cringing.

I have seen plenty of shows that use comedy to highlight a serious issue and within that context, they show the funny and unseen side of depression, OCD, single parenthood etc… Sadly, despite a well-meaning attempt, this doesn’t happen with Oddball and it proves to be pretty uncomfortable viewing.

The lack of support given to Forristal (costumes, interesting lights, a narrative) means that she is very much on her own with the script and her abilities and neither is of a high enough level to make the show a success. I commend anyone for speaking about uncomfortable or personal subjects, but that alone does not make a good show, and without the basic theatrical structure you can lose an audience quickly in the quest to be funny.