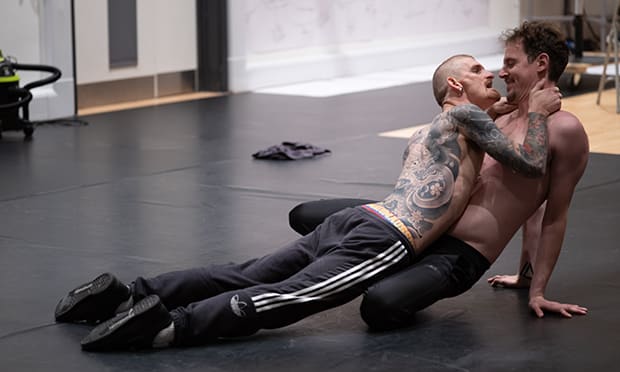 As Akram Khan’s ballet Creature cavorts through its classically enthused narrative in the main space of Sadler’s Wells, something fascinating is going on at Lilian Baylis Studio. Something new, fresh, and brazen in almost every sense of the word.

Dan Daw, artistic creator and director of Murmuration, opens with a bitingly funny monologue, explaining what we are going to witness – laying the groundwork for a safe space free of judgement. Trigger warnings involve “suffocation, loud noises, and sexy disabled people”.

I’m nervous but intrigued, and throughout this exploration of kink, self, sex, and disability, we feel in good hands.

Christopher Owen joins Daw as the dominating yet loving presence throughout the piece – a piece unapologetically queer, sexy, and beautifully crafted.

Subtitled, with a sign language interpreter (Russ), the show is making the underground accessible for as many people as possible.

Together, they push Daw’s boundaries, yet Mark Maughan’s directing keeps it visually arresting, thematically stimulating, and if not family-friendly, then certainly not gratuitously sexual.

An exploration of Daw’s body, especially his tattoos, with a camera phone is one such moment projected over the back curtain. We watch the spines of the Japanese demon (Oni) on his back unfurl as if alive, viewing the contours of his mouth and shoulders as if they are mountain ranges.

A black cube covered in elastic fabric and vacuumized with a hoover is another such moment. This performance-safe version of a breath-control sex toy has Daw’s body frozen almost in carbon, a little like Han Solo in Star Wars if he were wearing Andrew Christian underwear and nothing else. An arresting image indeed – comforting and described by Daw as “a big, expensive, taxpayer-funded hug”.

Ironically, the points in which Daw and Owen physically interact the most are the least effective. There is some rolling around/dry humping sections which, although getting them sweaty (helpful for a show about sex), feel a little unnecessary in comparison to the subtler elements at play.

Lastly, at the very end, it seems that they have too many thematic loose ends to tie up, and therefore end up with three possible endings. This might be down to the piece being about 20 minutes too long, because I don’t know about you, but a play about sex lasting for 90 minutes is out of the ordinary isn’t it? However, the final image of Daw embracing his demons indoctrinates you into his cult wholeheartedly.

Throughout, the writing is searingly funny, explaining Daw’s personal journey to find his power in a world built to suppress it on many levels. This is dance/art/theatre where it should be – pushing boundaries, testing limits, making change, and it’s awe-inspiring that Sadler’s Wells is at that frontier.

Don’t get me wrong though, this piece is not for the fainthearted or prudish. Yet the eye-opening glimpse into the pull of the fetish community and its healing influence are gemstones worth digging for.

Who knows? You might just be tempted to dip a latex-covered toe in the water!