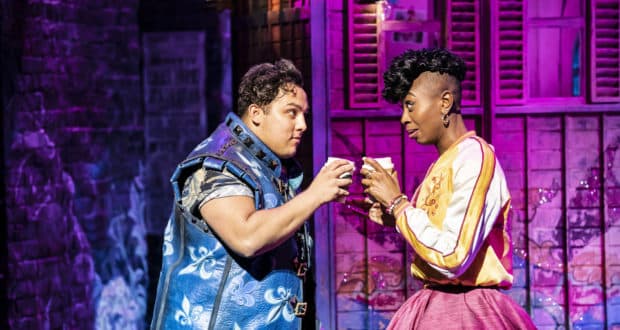 Some would say that throwing a Gala event whilst doing a drastic reconstruction is foolhardy. But “hold my plastic prosecco bottle,” says Shaftesbury theatre! Despite the carnage & Juliet charms & astounds.

Rewritten before our very eyes, David West Read’s twist on Romeo & Juliet hits buzzwords a-plenty yet still comes out feeling fresh. Will spear’s himself and his under-appreciated wife Anne Hathaway battle over the narrative as a very camp selection of pop songs are cleverly woven into the tale. Not an original score, but a play crafted around Max Martin’s impressive discography, less jukebox musical and more top40. Nevertheless, the vocal skill, sass, and energy is off the charts.

Juliet (not dead) must find herself and her future, fighting the same things she fought in the original 1591 play. Miriam-Teak Lee (despite a tendency toward an American lilt) is phenomenal as the lead. She’s spirited, conflicted, with a soaring vocal range and enigmatic stage presence. Cassidy Janson provides the musical theatre experience and comedic punch, almost stealing the show as the bubbly but heartbreakingly forgotten Anne. David Bedella channels all his Frankfurt charm, reducing us to ugly chuckles as the domineering father in love with Melanie La Barrie’s trouble-causing nurse. Jordan Luke Cage brings a charmingly pathetic reinvention of Romeo, very fitting for a modern era sad-boy trope.

Paloma Young’s Tudor inspired costumes change like the wind, modern yet with period touches, ruffles with gleaming white trainers, what attention to detail. Soutra Gilmour‘s set is all bright pinks and fairy lights, just the sort of trashy flashiness we all sometimes need from the theatre.

Yet all that glitters….as they say…. A show with this much Britney Spears and Katy Perry must have a heavy dose of queer representation and thankfully they do. Yet somewhere between West Read’s book and Alex Thomas-Smith’s rather flat performance as the genderqueer character May, there is a missed opportunity. This clumsy attempt at the complex role leaves a small note of disappointment. Along with the nightmarish queue system for the toilet/bar (neither covid nor human safe) the Gala night isn’t without tears.

But with the whirling dance moves, powerful female characters, and message of empowerment who has time to be disappointed? & Juliet brings a new dimension to the Shakespearian classic perfect for the modern age. Never feeling laboured, the feel-good hit will spread a grin from ear to ear even if you don’t want it to! A heavy grounding by West Read in The Bard’s work means that maybe it’s not as fluffy as you might think?