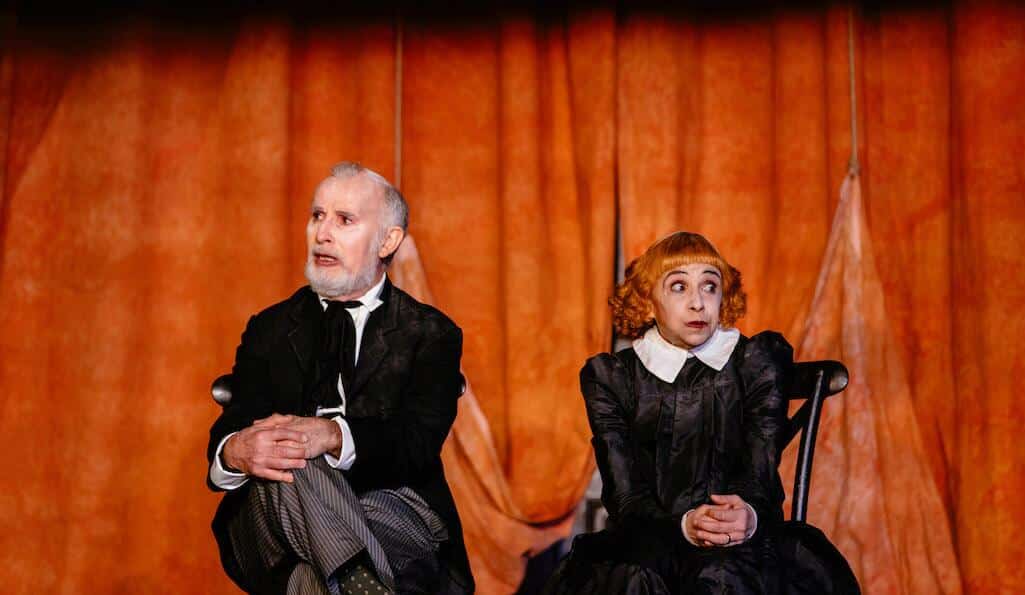 What can be said of Eugene Ionesco’s subline surrealist play The Chairs? A little like dropping acid at a children’s birthday party the experience proves hard to describe, but as it is my job to do so, I’ll try.

Bursting into the pre-war gloom of the British theatre scene Ionesco joined the illustrious ranks of Europe’s experimental theatre markers. Bertolt Brecht, Antonin Artaud, and Samuel Beckett sit on this council of challenging yet outstanding playwrights. The four black crows of the theatre world, staring gloomily down at their perplexed and bruised audience members. Beckett and Ionesco building on the groundwork of Artaud and Brecht.

Visually this incarnation recalls polish theatre maker Tadeusz Kantor, but with a decanter of Beckett’s Waiting for Godot poured into the mix. Kathryn Hunter and Marcello Magni sit together, white faces, pink wide eyes, Charlie Chapin black and white costumes, and Buster Keaton-style neckerchiefs. Throughout the visuals are very Marx brothers, with a heavy dose of slapstick. Cécile Trémolières and Naomi Kuyck Cohen set is all large dusty white theatre curtains and a small spinning wooden centre, a simple home for the nonsensical.

Together the Old Man (Magni) and Old Woman (Hunter) run rings around one another, reminiscing about their unfulfilled life in a script that goes suddenly ludicrous and then dives back to an almost reality. Hunter even admits “it is a very odd script”. Hinting to a possible post-apocalyptic world, this couple may be all that is left, and what a remnant. Things really get going when they start inviting guests into the house, to hear the old man’s great message, Hunter bringing on an endless number of chairs. But does anyone ever materialize? What of the guests? this cross-section of society? Well, that would be telling. Spoiler alert this is a 3-hand cast, so you do the maths.

The revival of the play in the late 90s by Théâtre de Complicité and the Royal Court Theatre makes a nice link to the current reawakening. With the help of Magni, founding member of Complicité and Toby Sedgwicks, both trained with Jacque Lecoq the piece keeps its experimental feel. Starting with an “overheard” (broadcast over the tannoy) conversation between the cast, Magni wanting to fake covid to avoid going on stage it’s a clever way to kick things off for such a self-aware play.

Hunter is a born clown, with a strange smokiness to her voice, a nightmarish vision of old age, and suppressed sexuality. Her long thin arms flail wildly around her head, as her infantile smirk charm and challenge the audience. Magni is also an accomplished physical performer, and this makes up for his stumbling over the lines and missing ques. Getting caught on his handkerchief or his detailed ability to mime justifies his casting. Sedgwick (the speaker/stagehand) is tasked with a very challenging monologue as a conclusion, dealing well with the monotony needed for the joke to land.

The high points are the physical gags, the confusion of miming some objects and not others, teacups appearing mid gesture, mops bashing into heads, a lovely layer of silliness. Hunters peacocking for laughs and even the limited audience participation produces explosions of laughter. Omar Elerian’s translation and directing highlights the play’s absurdity, while keeping the action manically careering along. Somewhat disappointingly this pace isn’t sustained, and the final build-up falls a little flat. Although the imagination needed to believe you are in a crowded room, instead of an empty theatre is a tall task for any artist.

Overall, the piece confused me, tickled me, angered me, and bewildered me, and I think that’s precisely what Ionesco would have wanted. A razzle-dazzle of the mind, an intellectual pickling, a befuddle of the senses. Like tumbling down Alice’s rabbit holes it is hard to tell if the people on stage are mad, or it is you. Despite some moments of lull, the overall effect is delightful and disquieting in equal measure.

Check out the Almeida for more amazing performances