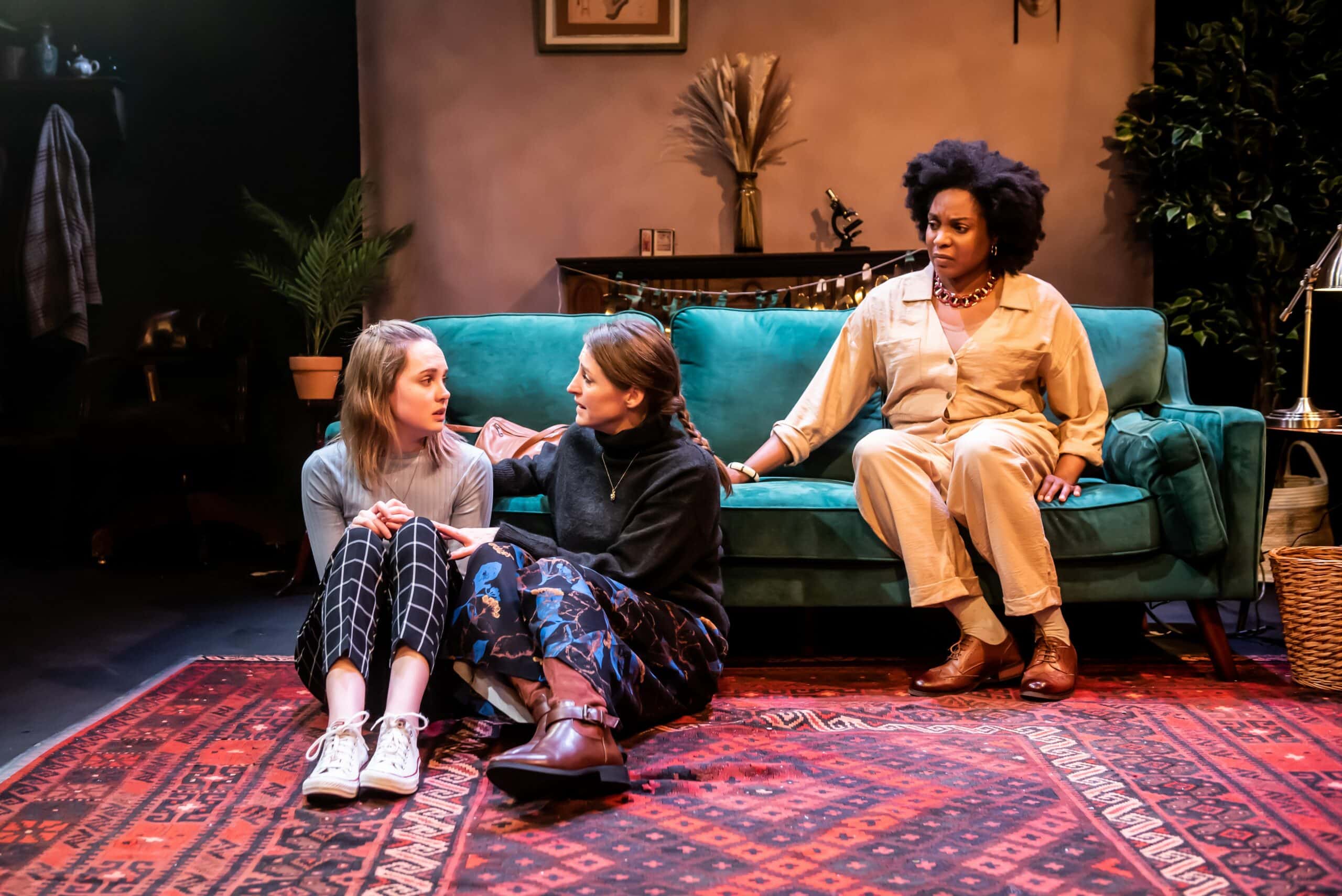 American playwright Carey Crim’s gutsy emotional drama takes its first faltering steps in the UK. The play attempts to weave various issues surrounding consent and family into an overarching narrative but gets itself twisted in the process.

We are ushered into the domestically blissful world of Alison played by Flora Montgomery and her partner Nadine played by Amanda Bright. On a large blood-red carpet and bottle-green sofa surrounded by the detritus of a life shared we see a glimpse into a relationship almost too perfect. Dramatic irony issues a cruel cackle as their daughter Eleanor played by Meaghan Martin arrives back from college on a quest to find her biological father. Slowly the threads of this family unit are tugged out of place. Emotionally and physically circling one another, painful truths are revealed and the rippling effect of sexual assault is explored.

Crim’s flashes of humour allow the piece to flow nicely, and Gilbert Kyem Jnr, as Rob (Eleanor’s boyfriend along for the ride) does his best as the pseudo comic relief. Montgomery stands out as Eleanor’s biological mother, harbouring secrets that start to take control. She is an intriguing character, commanding great strength and at the same time histrionic vulnerability. The weight of motherhood, self-sufficiency, and survival can be seen etched deeply into her physicality. Montgomery takes the more melodramatic sections of the script in her stride and along with Martin is by far the most watchable of the cast.

Winning the 2017 Jane Chambers Playwriting Award for feminist plays it is unsurprising that the lion’s share of action lies with the women. Disappointingly Bright doesn’t quite make us understand the character of Nadine. Meaty monologues discussing coming out to her pastor father aren’t given the energy they require. The discussion between Nadine and Alison about the difficulty faced by lesbian mothers does strike an interesting note considering the recent row regarding IVF on the NHS.

Fittingly it’s the menfolk that rather let the side down. Adrian Grove playing Eleanor’s father falters notably with his American accent. His character’s journey from drunken “blackout” frat boy, to recovering alcoholic, and final penitence is well written, but Grove’s arc is not clear enough. A lot hangs on him, and it must be a difficult role to inhabit, forcing contemplation of some pretty dark places. Sadly the depth isn’t quite there.

Katharine Farmer’s directing steers clear of unnecessary embellishment, with simple lighting and scene changes. Keeping the themes of trauma and possible redemption front and centre. The blocking however is rather static, and formulaic. The chaos of an emotional confrontation isn’t effectively staged. The final scenes timing goes out the window and leaves the conclusion floating whispery in the air.

The depiction of a strong queer family is uplifting and rare, this is where the piece glows. The relationships and support women give one another is beautifully written by Crim. Yet the larger group scenes slip into a forced sense of the importance of the subject matter. The characters clash, bashing into one another on the woven battleground, but something in the spacing of these showdowns feels hollow. Considering the current and long-overdue critique of the patriarchy Never Not Once should be at the forefront of this discussion. Yet somewhere in its transfer across the expanse of the Atlantic, it has lost potency, even if its heart is still shining in the right place.