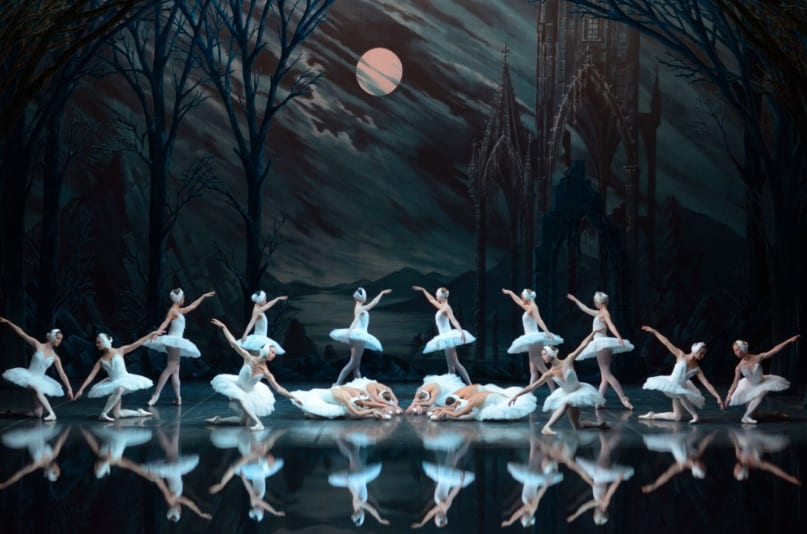 Can Swan Lake ever disappoint? Is the famous love story ever able to fall flat on its….beak? When something becomes such a classic does it begin to feel clichéd? When crowding into the glittering London Coliseum to see the impressive St Petersburg Ballet Theatre’s re-telling of the tale, I wondered. Although stuffed full with all the accouterments you would expect from Swan Lake, there is something missing. Some heart, or flare. The very thing that would make this production stand out and lodge in your throat never makes itself known.

It all feels slightly lazy. Not the dancers (who move like demigods), but the set, the staging. The costumes too – everything feels reused, and the déjà vu is palatable. Yes, this is on a grander scale, with more rhinestones than Liberace and played by a cast that would only fit inside a tour bus, but it doesn’t offer anything new and feels rather stereotypical. Like a ballet done in one’s sleep, we lumber through scenes with physical skill and grace, but very little emotion.  For the purists out there this was precisely what you would expect, and maybe that’s a good thing. But with such skilled dancers, music that moves the soul, and a whopping budget, surely a little of the unexpected wouldn’t go amiss?

The shining star of the production is Irina Kolesnikova as Odette/Odile, who dances with a grace and strength that is utterly captivating. Her ability to juxtapose the White Swan’s naiveté with the Black Swan’s sensuous strength is breath-taking, and she is a bright light in a rather unremarkable sky.  An honorable mention must also go to Sergi Fedorkov, who’s jester provides much-needed comic relief. The rest of the dancers fulfil their roles, but although they are draped in lavish costumes, they don’t stand out. Even with such incredible feats of physical endurance and beauty filling the stage, I confess that I felt my mind beginning to wander.

Overall, the production seems a little tired. By all means, take your grandmother to see it – you get what you pay for. Swans, a lake, a doomed love affair, and the mistaken idea that waterfowl are friendly. But for a piece that in the past has made me cry, this reprisal was found wanting. After the clouds of feathers settle, one is left decidedly ungratified.