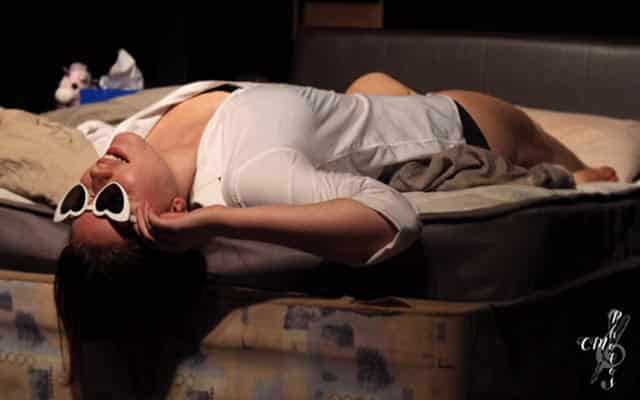 A bed very similar to Tracey Emin’s famous squalid art show greets us as we crowd into the basement theatre at the Cecil Sharp house to watch Freak by The Herd. Despite the low-fi feel of the space and the warbling echoes of the choir rehearsing above, the show is captivating, darkly moving and funny. With a few knock-out performances and some uneven but impressive writing, Freak is an inconstant charmer, a fickle lover and a head-first dive into the bubbling waters of female sexuality.

However, this is not just a case of a good show in a bad venue. There is plenty of room for improvement. We are welcomed into the bedrooms of Georgie, a fantastically broken, cynical 30-year-old and her niece, Leah, a naive and sweet teenager on the cusp of losing her virginity. The problems begin not with the story but with some of the clumsy stylistic choices. An abrupt and badly recorded voice-over links the various monologues together, which is utterly distracting. There are also unnecessarily elongated dance sections during which both characters are in their underwear. And finally the spoken/screamed version of Beyoncé’s ‘Who Run The World’, which is toe-curlingly cringeworthy. Although the story is effective, the details and contextualization feel a little amateurish, and the show needs some serious tightening up.

Another major problem is more of a thematic one. The script is very topic-heavy. This show touches on serious issues involving sex, death, and life. It’s a tale of modern loneliness and the pressures of being a woman in the world, and it conveys this well. But maybe the writer Anna Jordan could learn that less is more. Although it is filled with wonderful moments, the crescendo of emotion is far too long and feels like it’s beating the audience over the head with the issues covered. I love a frank and open discussion of difficult topics (we are all adults here), but you lose an audience if you overdo it, and at times it came across as a tad melodramatic. Equally, Marie Colahan’s Leah is far too over-acted. It verges on the ridiculous, and although Colahan is clearly a good actor, this is not a glowing performance. This show needs stripping back and shortening by quite a bit. There is a real diamond here, but it just needs a little cleaning.

But what constitutes this glittering potential? First and foremost, it’s Caitlin Burrows’s stellar performance as Georgie. Not an easy character, Georgie deals with the brunt of the emotional trauma of the play, left by her partner, working as a stripper, being raped, she is a twisted and marvelous character, sexually brave, cynical and dreamlike. Burrows’s performance is all that and more – there is a real gemstone hiding in this basement in Camden. The writing, although a little reparative, is very strong as well, juxtaposing the two age groups and their voices cleverly. The jump between the mainly humorous Leah and the jaded Georgie works very well.

Although the show borders on the over-stated, the subject matter is very important. It talks unashamedly of female sexuality, female puberty, and the crushing pressure and clawing hands of the world on female bodies. This message rings true and I think the failing of the play lies in its eagerness to get this message across to the audience. Freak has a way to go, but if The Herd edit and streamline this show, it can really go places. I look forward with great excitement to the next evolution of this group’s work!