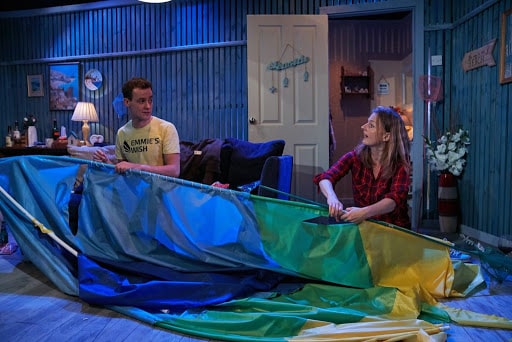 Memories of sticks of rock and walks along the pier are quickly smashed as Caterpillarputs its well-written fist through all of our fond seaside memories. This play is hard going; spinning with unstoppable precision, it covers a wide range of topics with as much grace as could be imagined. We are introduced to Claire and her mother Maeve in their B&B somewhere on the northern coast. Add into the mix unexpected guest Simon and the stage is literally set for this snappy three-hander. Imagine Faulty Towers, but instead of loveable physical comedy and dubious cultural stereotypes, we get an emotionally grinding set of very real issues brought to a boil as seagulls scream overhead.

Despite all this competence, there is something that stops this sharp play from penetrating down to the bone. The writing by Alison Carr blisters on impact, but is undersold slightly by two main factors. Firstly, although I love Theatre503, it is a tad too small for the show; the two-act play could do with more space to flex its considerable wingspan. The set is clever and gives the impression of a spacious living room, but a lot of the movement feels cramped and moving this to say the Arcola, would allow for a second location (which the play sorely needs). Secondly, with such a strong cast, Judith Amsenga, who plays the deeply troubled Claire, takes a while to warm up into the role and is, unfortunately, the weakest of the three. The performance is acceptable if a little overloaded, but with a part that every actor dreams of, it is underwhelming. This jaded mother who is battling with postnatal depression and struggling with motherhood is a part to sink your teeth into and I feel Amsenga only really nibbles.

Despite having small constraints, it is truly a splendid show. It is both unflinchingly open about its discussion of depression, motherhood and family relationships, as it is funny and symbolic. It has everything you could want (if what you want is a smorgasbord of mental health issues, abandonment, sex, drinking and broken promises). Both Tricia Kelly, who plays the hard as nails, loveable flamboyant mother Maeve and Alan Mahon, who plays the unexpected and complex guest Simon, deserves a mention for truly outstanding performances. Kelly gives us fast-talking humour, irony and a touch of camp about her, allowing the A Taste of Honey-esque mother-daughter relationship to really shine. Mahon’s performance is a lot subtler, luring the audience into loving him with a ‘knight in shining armour’ façade that is so impressive, that when it is dropped, the audience is genuinely shocked. The set is beautiful (if small), the lighting clever and the music and sound appropriate. We are truly and effectively transported into this microcosm of loss, betrayal, and loneliness and left adrift in a beautiful if unkind ocean.

What is most important about this show are the issues it touches on, especially the mental health of mothers and their daughters. This attempt at coping with the pains of life and how families often fail to do so, is heart-breaking. This is done cleverly and with a confidence that is a testament to the actors, director, and writer’s clear talent and bravery. This is not a skip along the beach, but when is anything of value ever easy? Leave your jelly shoes at home and put down that choc-ice, for you are in for the ride of your life.

Caterpillar is playing at Theatre503