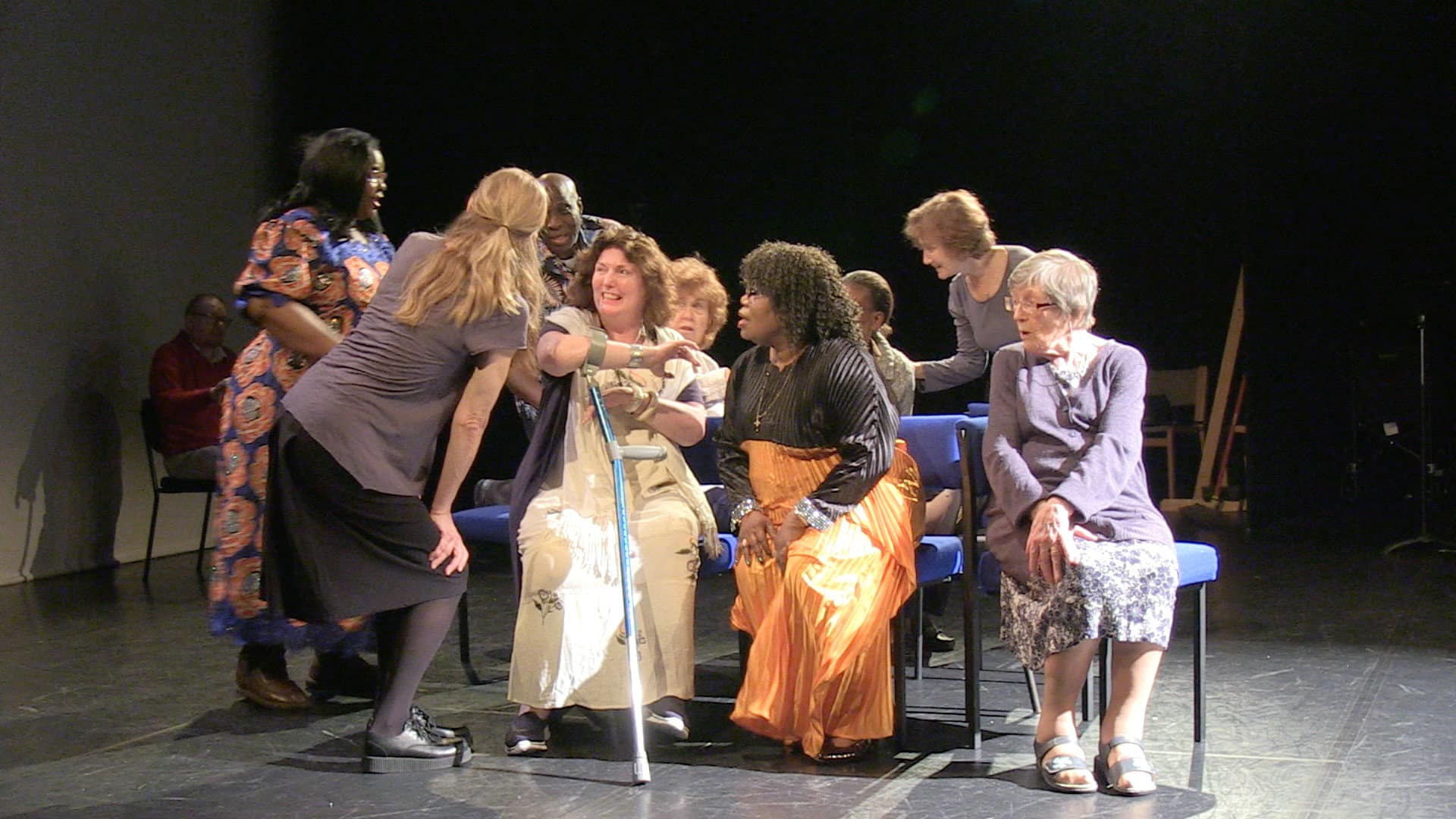 Theatre is at its best when it has a link to reality. Instead of existing in a world of smoke and mirrors, theatre can be a force for great change and therapy, and with a tie to human experience, it can breathe fresh air into an old art form. Stroke Odysseys is a fascinating example of how theatre can really provide a truthful insight into people’s lives, and in the process, creates something quite amazing and revolutionary.

With an introductory talk (which I will talk about later) we were introduced to Rosetta Life, who works with hospices and hospitals to bring an enriching environment for people who have survived strokes. The wonderful choreography of Ben Duke and the sublime music of Orlando Gough links to the work of Lucinda Jarrett (leader of the project) and brings together the stories and experiences of 6 stroke victims in a fractured and moving piece. The play ultimately touches at the heart of an issue facing 10,0000 people in the UK alone each year.

The piece starts with a talk by Duke, Gough, and Jarrett, and although I commend them for their work, I feel that this talk is at best unnecessary and at worse patronising to the stroke survivors/actors. Since the talk is before the actual show, it starts us off on a bad foot, talking more about the work of the able-bodied people within the production and the science of stoke and not the actual lived experience of the piece. It is interesting to hear from a neuroscientist (in video form) on neuro-plasticity and the possibilities for continued improvement by stroke victims, but having it the talk first distracted from the people behind the statistics. Unfortunately, the framing of the show within this “professional” lens weakens the experience for the audience and is potentially problematic as a form of “explaining” what the show means. The work of Rosetta life, Duke, Gough and Jarrett is groundbreaking, but is this really how the show should be presented? What followed is golden, but I just wished that the people involved in the project would allow that to be heard more clearly.

But let’s speak about the show, and what a show to speak about, heart-breaking performances that brought together a diverse cast in every way. Music, singing, and movement merge, and we see the pain, fragility but most importantly, the strength and spirit of these people who won’t allow a condition to ruin there lives. In such a huge dance space as The Place theatre, a piece could easily get swamped, but with the very clever use of projection and small whiteboards as portable TV screens, the piece is both visually beautiful as well as emotionally resonate. This piece works within the limits of the performers and for that reason; it has a wonderful simplicity and range of movement. It isn’t Swan Lake, but it is something more brittle and equally beautiful. Repetitive group movements, the use of chairs stacked in a cluster, and fragmented singing and music are used to immerse us in a dream world of hospitals, frustration, and hope that is glorious and difficult to watch.

A lot of the sound comes from two singers, and two musicians (also stroke survivors) and uses repetitive snatches of language, and great harmonies to look at the common side effect of strokes and Aphasia. This is accompanied by the simple but arresting choreography of Duke and creates the liminal landscape of the piece. There are moments of surprising comedy and lightness and it explores moments of the victims’ lives with real complexity and abstract skill. We have sections on scuba diving and one of my favorites bits based on a traditional dance. But the moment that really hits the audience as the most poignant, and what has been replaying in my head ever since, is the section where the whole cast sings a song, hauntingly filling the space with its chorus line “I dream able-bodied”. The fractured disparity of their voices blends in a beautiful choir of people all affected by issues in different ways, but all dreaming the same. Other members of the project are in the audience and joined emotionally in the song and this is a magical moment. It reminds us that theatre is not only a force for change in a vague emotional growth sort of way but can really give a voice to the hopeless and forgotten, it has a practical health benefits (as Rosetta Life proves) and when you sit and hear the varied voices of Stroke Odysseys, it is hard not to cry as their experiences wash over you. That is the power of theatre, and I would recommend anyone who can go see it for yourself!

Stroke Odysseys has finished its run at The Place.