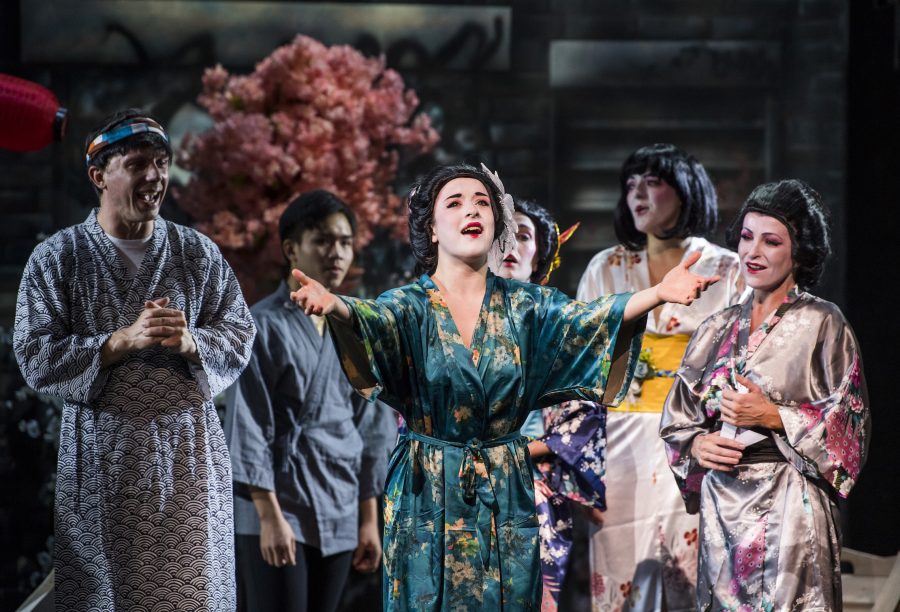 Did you ever want to watch 3 incredibly complex operas slimmed down into 35-minute slots? Simplified beyond all rhyme and reason? No? Well neither did I! Pamela Tan-Nicholson’s vanity project TriOperas takes the shows we know and love and picks them clean to the very bones, creating a comic, bland remnant in their place like a discarded banana peel at a bus stop. Nothing is safe; Turandot, Madame Butterfly and Carmen are reimagined into a speed-dating version of the glorious originals. Add in gimmicks and confusing dramatic choices and you have the maelstrom that is TriOperas.

Unfortunately finding positives in this show is a very difficult task, some of the music is quite beautiful and at times it could be called aesthetically pleasing. The main feature of the show that is commendable is its ambition (which could be seen as arrogance). Tan-Nicholson seems to have done everything, from creating the concept, translating the texts, writing the music and conducting the orchestra while playing the piano. This, I would say, is too much for one human to do, and the show suffers because of it.

Now for the less-positives, but where to start? Firstly the idea of surmising three operas into a show collectively as long as one of the originals is a foolish idea. We end up with three stereotypical female characters that are as insulting as they are two-dimensional. Turandot comes out as cold and cruel, Madame butterfly naive and weak, and Carmen a common whore. This is so far from the complexities of the originals it is painful. Part of this is the hurtling speed that the show moves at and part of it, sadly is the strange translation of Tan-Nicholson. The show is in English, with a confusing mix of modern slang and older turn of phrase, neither setting the pieces in their own time periods nor fully updating them to our own. The characters are left, undeveloped and unsupported by the text, hanging in dramatic limbo. This show is billed as a great introduction to opera, but it is more of a cautionary tale!

Practically the show is amateurish, and despite the massive amount of money that is thrown at the stage, it comes off as shabby and cheap. The set is unimaginative and restrictive, with two levels and an unconvincing looking Chinese castle wall and gate in the middle. For some unknown reason, the orchestra is shoved stage right, and are on stage the whole time. There are multiple set changes that are undertaken in full light and by the tech crew in their blacks and headpieces. This is unacceptable. If both the practical gears of the show and its intentions are unclear, I don’t know how you can expect the audience to understand the piece as a whole, and we didn’t.

What’s next? Gimmicks? Do you like any of the following? A random lady in fetish gear in twelfth-century China? Tap dancing geishas? Pole dancing gypsies? Every cultural stereotype in its most basic form? Unexplained aerial performances? Semi-naked sumo aerial performances? People dressed like moths (again also flying, again also for no reason)? Unnecessary Trampoline sections? And dragon dance from a bull/lion (highlight of the show)? If you do, then this is the show for you! As if taking on these rich, complex classics of opera isn’t enough, TriOperas doesn’t stop at that! It also throws all of the above and more at the audience in a laughable and overwhelming attempt to create theatre. Even the very worlds created, ancient China, Japan after the war and Spain (god knows when) seem shallow and ultimately unbelievable.

This show skates along the surface and tries to razzle-dazzle its way to success. Throwing gimmick after gimmick in the audience’s eyes in hope that they won’t notice the tech crew lugging set pieces of the stage or the fact that the plot makes no sense. With the translation only succeeding to show us the worst side of opera and succeeding in putting me off seeing any for a long time I kept asking myself why? Why had this been put on? Why was I watching it? Why are the geishas doing a lap dance? And why for the last time? With love and death being battered over the audience’s head, I will leave you with possibly the most astounding sections of the show. TriOperas has the emotional connection of a long car ride and is a perfect comedy for all the wrong reasons, please avoid, (unless you want to see 10 minutes of dragon dance, that bit is actually quite good).

TriOperas is playing at the Peacock Theatre