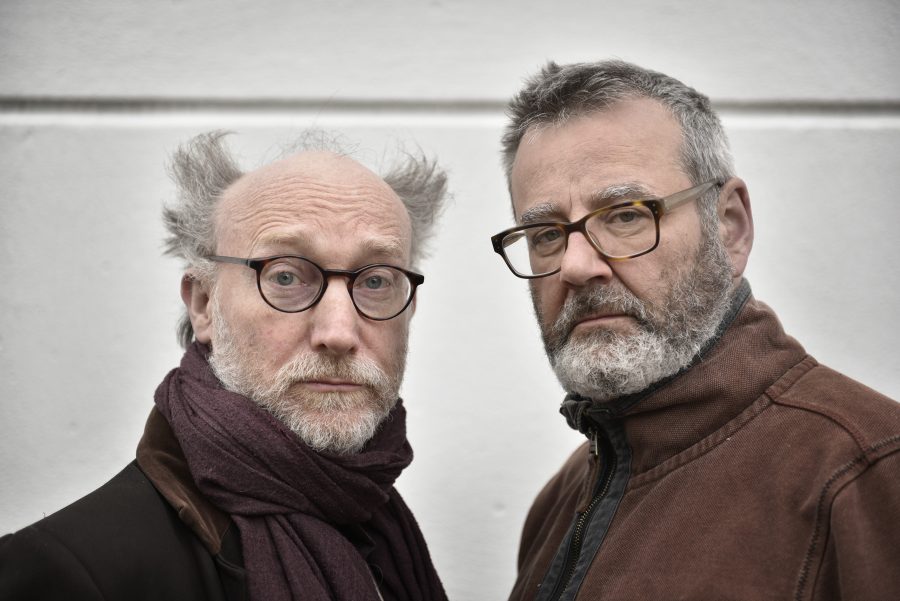 An explosion of silliness in a world that has become too cynical, A Sockful of Custard is a celebration of the influential post-war comedian the late Spike Milligan on his one-hundredth birthday. With a clear love for the subject, a flare for his signature foolery, and childlike spirit, Jeremy Stockwell and Chris Larner give us an insight into the man who touched so many peoples lives, both adult and child, the master of mirth and a deeply complex man. We laughed, we cried and we laughed some more, as this production rocketed thought his life, and the personal experiences of the actors in one of the best biographic plays I have seen in a long time.

But as always it isn’t all wine and roses, first the less effective sections. The main reservation I had, as someone who wasn’t of the generation who grew up with Spike Milligan, is at times I missed references and sections that someone older might not. My father loved Spike, and I grew up with some of his poems, but I wouldn’t recommend this play to someone who has no knowledge of him at all. Saying that, if you are interested in the history of comedy, and enjoy Monty Python or The League of Gentlemen, this will fascinate you. Milligan’s work underpins modern humour and this play is an insight into the way comedy changes and mutates with time. Another small problem is the pace, the play is funny, undeniably funny, ludicrously funny, but to create this humour, there is a lot of self-referencing the fact that we are watching two men “do” a play. The dynamic between the two actors is fantastic, but the roles they played at times could feel a bit repetitive. Overall though, this play shines and the negatives pale in comparison to the positives.

And now for the positives, where to start? One of the quotes that really struck me was (I paraphrase) “Spike Milligan brought a black and white world into colour” and I think its really important to understand the legendary comedic giant that created and starred in the radio show The Goon Show within his historical setting. His generation was broken from the Second World War and trying to find meaning, Spike Milligan found/brought laughter, joy, and love to a world recovering. Most importantly throughout, all the silliness that Milligan would have been very proud of this play brought that by the bucket-full joyfully!

Stockwell and Larner have a magnetic dynamic onstage and with many “funny plays” this production had a lot of life up to. What they bring is a joy to behold, chaotic, hilarious, rocketing from Milligan’s childhood to his work in the theatre, intermingling the true interactions the actors had with Milligan in their own lives. There are moments of sadness, happiness and everything in between and the show reminds me of just how transformative and cathartic laughter can be. We can lose sight of the importance of humour, dismissing it as frivolous or even somehow unimportant, but when the world is troubled, in Milligan’s time, as it is now, sometimes silliness is the best remedy. A Sockful of Custard is the cure we didn’t know we needed; I recommend it from the tips of my hair to the bottom of my…socks.

A Sockful of Custard is playing at the Pleasance Theatre Trust