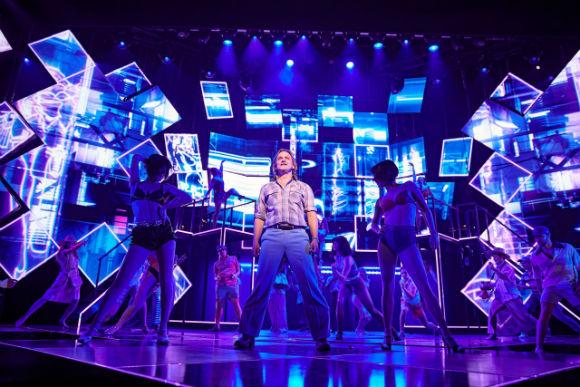 So, you thought the 80s were all power ballads and big hair? Well…. you were partly right, but Chess proves that along with the shoulder pads and chiffon, there was a bubbling undercurrent to the period that was not quite so flashy. Chess’s opening night was a spectacle, as we crushed into the glittering London Coliseum for a revival of the famous show written by Benny Andersson, Tim Rice and Björn Ulvaeus (Andersson and Bjorn were part of the Swedish super-group ABBA). This musical could have easily felt dated, but with the passion of the audience and some clever use of modernity, what we saw something both heart-warming and fascinating.

The story is set at the height of the Cold War and tells the tale of four characters, and their battles with the political systems and one another. The main basis (and title) of the show is the face-off between the USSR and the USA in one of their less bloody confrontations, the international chess championships. With a wonderfully shattered glowing chessboard to greet us on arrival, the show jumps straight into use of the two massive screens created by the chess squares that dominated either side of the stage. This is a set where no penny is spared, and it shows. Shoulder pads and big hair are flying as we get into the battle between the two chess players. One fighting for the Communist side and one for capitalist and the pressure added by this east meets west story provides us with emotional turmoil and power ballads a-plenty. This show has everything in shedloads and is not for the softer musical fans, The Last Five Years fans beware! If you hate the synth this show might be one too miss. Despite the high intensity, the show is wonderfully acted and the use of a very complex set really brings new life to an engaging period piece.

It is not without its problems though (nothing is). Firstly, a small but rather important thing that grated on me throughout the show, accents! The Americans are fine but not a Russian accent graced the show. This applied to Alexandra Burke, but this was not the only problem with the X factor star’s performance. She sings wonderfully, but her acting abilities and inability to sound remotely Russian counted against her. Another problem is that although the massive screens are wonderful for capturing minute detail and the inventive use of live filming on stage, it has its downsides. Sometimes it feels the cameras on stage are stealing the focus from the audience. It was at times like a surreal documentary or sections from the first season of Sex and the City, characters switching camera angles and breaking the fourth wall? Or the fifth wall? It’s hard to work out what wall is at this point. In its defence, it is a perfect way to naturalise and invoke the 80s TV that we are all familiar with, but it may have sacrificed some of the show’s musical theatre heart. Another small issue is who the show is aimed at; I am sure at the time Chess felt topical and about a real political threat, but now it is more of a period piece (as time has a habit of flowing onwards) and although it still has relevance today with current tensions in old quarters, this is not highlighted in this production.

I really enjoyed it and felt it was a wonderful insight into a time in history, but the emotional reaction just wasn’t there for me, and maybe it can’t be for anyone who hasn’t lived through the Cold War or leg warmers. It was a had-to-be-there sort of shows, like listening to a story about when your parents were at university, thrilling, exciting and historically interesting but at times hard to believe, when life was so very different but also scarily similar. Overall the acting and singing are of a very high calibre and the highlight of this production is Cassidy Janson playing Florence. Not only does she smash the ‘I know him so well” moment that we were all waiting for, but she gives us life and depth to a character that could easily have been lost in the big hair.

Anyone who likes big expensive musicals, dancing, costumes, glamour and a whole lot of very emotional, slightly shouty power ballads will love Chess. But it is more than that, with the massive screens working at their best when the two chess players are playing against each other we see the chronicle of the Iron Curtain shown over the actor’s faces. This was a real threat, which had the world on the brink of destruction and to cover this with such skill is a very impressive task. For a play about the Cold War, ironically Chess is sizzling with life and vigour, proving that you can teach an old dog new tricks (or you can at least try).

Chess playing at The London Coliseum