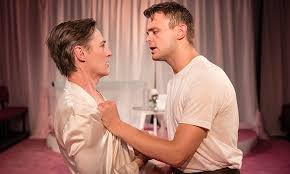 Something Unspoken and And Tell Sad Stories of the Death of Queens both explore queer life in its many forms during the 1940s and 50s.

Because of the explicit nature of the second play, it was never performed during Williams’ lifetime and, like E.M. Forster’s Maurice, it sings with an unrepressed fire that often comes from writing without the possibility of public showing.

Both stories show the roadblocks confounding the happiness of LGBTQ+ people in the past.

Something Unspoken is a quiet passion between an ageing society “belle” and her secretary.

With undercurrents strong enough to warrant a ‘No swimming’ sign, the play touches interestingly on the relationship between love, power and class in classic Williams fashion.

Annabel Leventon’s depiction of Cornelia, the intimidating head of polite society, steals the show, inflecting that southern charm and accent with confidence and gravitas.

The performance is deft and utterly enjoyable to watch.

Although a little slow, the writing is poetic and filled with missed chances and unspoken pain.

And Tell Sad Stories of the Death of Queens is the complete antithesis – fast, loud, violent and heartbreaking.

Following the desperate search for love and companionship of another ageing queen, Luke Mullins’ clever, heart-wrenching performance as Candy, our second “belle”, is astounding.

Dealing with being transgender in the 50s, while being manipulative, a touch naive, and very lonely, the role of Candy is a mouthful and a half.

Watching her doomed attempt to make a home with the frankly abusive Karl (George Fletcher) is a miserable ride.

The piece is all shout and bite, and the candour that pours out of the openly gay and confident characters explodes into this little space.

It’s a fresh view of the queer world of the 1950s and, of the two plays, it speaks more directly to our own time.

Performance and writing-wise, both pieces sing. The only sand in this theatrical cucumber sandwich is the rather confusing directorial and design choices.

Although a full period setting is expensive and likely out of the question, the choice to have stark modern furniture and blank papers, pictures and walls is perplexing.

It is sorely missing the little naturalistic details that would have grounded the whole show, and although the costumes are fitting, this criticism must be levelled at Jamie Armitage’s directing and Sarah Mercade’s design.

Despite this, the talent involved glitters, and both plays explore the way that society forced, and still forces, queer people to contort into unnatural shapes to love who they love.

Something Unspoken is a love buried; And Tell Sad Stories of the Death of Queens is a love twisted.

Both highlight the genius of the writer and the importance of places like the King’s Head Theatre in allowing such work to see the light of day.

As Candy states in the second piece: “Imagine this country without queens, it would be terrible.”

It’s as true now as it ever was.