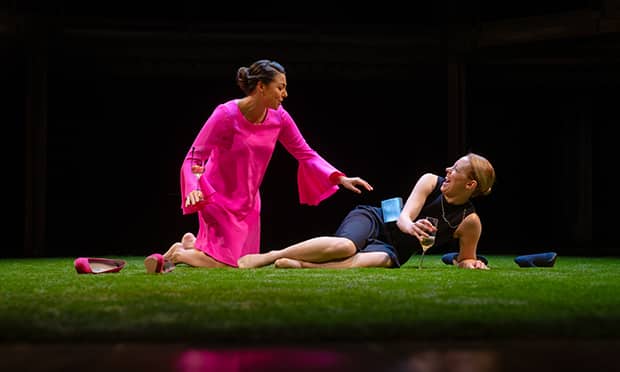 “The course of true love never did run smooth” – although from a different play, the line is fitting for the Royal Shakespeare Company’s production of the bard’s pastoral comedy As You Like It at the Barbican.

Despite some exuberant performances – and a giant! – the piece itself takes a less than direct course.

Despite having more romantic drama than an episode of Love Island, the female friendships depicted, and the power given to female characters, makes the play one of Shakespeare’s most refreshing.

This is one of the playwright’s most popular comedies, and the production tries its best to keep up with the famous wit that is so often discussed by the characters (at great length).

It features some strong performances. Lucy Phelps as Rosalind and Sandy Grierson as Touchstone the clown stand out – both understanding the comedy within the text. The actors leap, crash and bumble around the stage with such energy and skill that they are a joy to behold.

Anthony Byrne, although giving gravitas to his two roles, is undercut by the confusing choice of having him playing both the evil duke (who banishes everyone) and the good, banished duke.

As You Like It has more turns that a Devon country road and the choice to make it even more confusing is a bit perplexing.

Following on from that, Sophie Stanton gender-bending to play Jacques, who comes out with some of Shakespeare’s most memorable lines, gives a rather lacklustre performance.

A range of confident actors populate the stage, but the backgrounding of these capers is where the production loses its way.

The first section, despite its plain set design, engages us, because the intrigue of the court is amusing.

Suddenly, when all the banishing happens – big fan of all the banishing in this play – a curtain is pulled down to reveal… a large floating wooden circle? We are in the forest of Arden but as the curtain falls away so it seems does any sense in the production.

The set is half Ikea living room and half TV studio, but this choice is never really explicable. In fact, what follows produces quite a few mutterances of ‘Why?’ from my lips.

With mirrorballs descending, excruciating audience participation, and an overall lack of rhyme or reason, the brains behind the play seem to have taken the “All the world’s a stage” line and run with it far, far into the distance.

I understand that this play has been staged many times and we must reinvent the classics – gone are the days of Robin Hood tights and paper leaves, and good riddance – but being novel for the sake of it is not much better.

This attempt at chaos with a twist is brave but ultimately makes it difficult for the audience to connect.

The messy creative choices coupled with the complex plot and barebones set prove too much for even a seasoned Shakespeare lover, so best of luck to a first-timer.

Everything descends into pandemonium, with little sense of purpose, and despite the eye-catching giant humanoid at the end, the attempt to be innovative forces the production into a corner from which it struggles to escape.