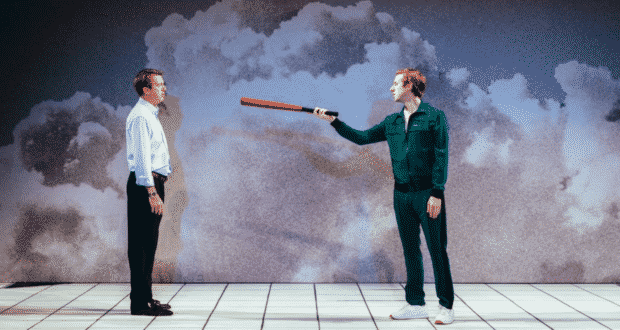 Into the slack, lazy matinee crowd explodes a bull in the Royal Court’s china shop. Thrashing, pointed, and poignant Al Smith’s searing play takes no prisoners, written in the language of power.

Having visited the play’s setting myself (the Uyuni salt flats in Bolivia) in my wild and slightly cringe-fueled gap year, my teenaged brain clearly missed the depths, both physically and politically, crunching under my sandalled feet. The struggle for the rare earth mineral (lithium) in a large, flat, blazing white battlefield is fought in this production by four enigmatic characters. A verbal Battle Royale if you will, with less bloodshed but an equal amount of scheming.

Writer Al Smith is a prestigious talent. Building from his success with Harrogate (also at the Royal Court) he presses on. Never has the importance of language and money been portrayed so piercingly on stage. The western characters’ lines are run through a literal translator, making them sound idiotic yet confidant; “soybean American” as the incorrect version of “I am American” is a hilarious example. Missed opportunities, shades of meaning and linguist jokes fly about the stage. We are equally gifted with the zinging, prophetic quote “in America you heal people with your wallet”. Hats off to Smith for his achievement; funny, clever, and sad – the holy trinity.

What of the topography of this desert of condiment? Well, Moi Tran’s set is cartoon and cut out. White tiles create the reflection of the salt, while slats on wheels, and operatic, dropped down screens, painted in pop-art style, depict other locations. The openness and the salt along with the rusting carcasses of the discarded British mining trains are brought to life vividly. Hamish Pirie’s directing breaks many classical rules of theatre, and we rejoice for it. Actors dance TikTok routines in shifting lasers as scenes change, then launch into heartrending naturalism; a post-modern twist in video game colours. This experimental sense has its downside as some things are left visible offstage until needed, looking a touch clumsy. Yet back this up with a clear ability to pull beautiful and understated performances out of the actors and you have a stunner in two acts.

Who are our players on this salty plain? We have the cold, hard, and calculating Anna played by Genevieve O’Reilly, altruistically trying to save our crumbling NHS at any cost. We have Henry Finn (Arthur Darvill), a Silicon Valley mix of Musk, Bezos, and Jobs, trying to save the world at any cost. Nayra (Jaye Griffiths) is trying to become president of Bolivia and protect her national and native rights at…whatever the cost, and lastly Kimsa (Carlo Albán) the owner of the land, trying to save his sick daughter and heritage at…you’ve guessed it… whatever the cost. Throughout, there is a constant layering of performances, fitting with the snappy script. Darvill, as the top billing actor, is however less dynamic than one would like, improving as the play goes on as his power begins to slip, but by no means the star of the evening. Griffiths, playing both the president and a more passive employee of Finn, flips the coin really effectively, morphing scene by scene with liquid ability. O’Reilly’s clipped British doctor, unwittingly recreating the terrors of the colonial past, is eye-catching, consistent in her quick quips and worryingly flexible morality.

The play’s three hours race by, as it touches on the interconnected world we live in and the power relationships between rich and poor, along with the practicality of utilitarianism. Being set only last year, Smith’s delicate fingers brush past Brexit, Covid, the privatisation of the NHS, and, most importantly, climate change. The ‘divide and conquer’ issue raises its ugly head as humanity is seen to pick at one another’s bones without a speck of empathy. An utterly selfish and not particularly heartwarming vision, but maybe the piece is more cautionary than a prediction? Let’s bloody hope so, as in Rare Earth Mettle overactivity in the face of disaster is as deadly as empathy.