In Bed With My Brother: PRIME_TIME 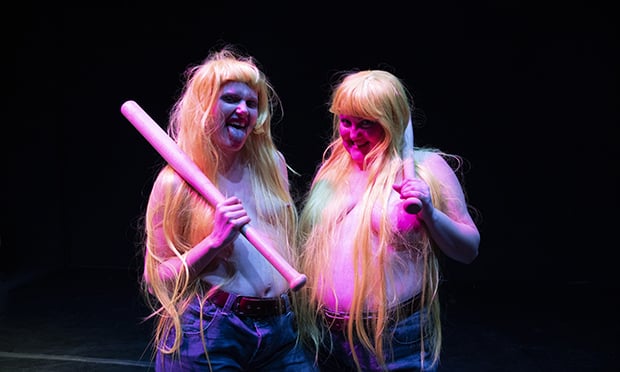 In the bowels of the Barbican, two women stand topless, shielded by a plastic curtain and wearing yellow wigs – an unusual start to any Tuesday evening, but one that produces chuckles and cringes in equal measure.

Dora Lynn, Kat Cory, and Nora Alexander, also known as In Bed With My Brother, are winners of the Oxford Samuel Beckett Theatre Trust Award.

Taking aim at Amazon founder Jeff Bezos, their show PRIME_TIME is more character assassination than political deconstruction of the billionaire’s role in the modern world.

It is rather assumed that Bezos is evil, and the focus on his personal life, location, and power overshadows the exploration of anything particularly astute. However, the show races along at break-neck speed, shocking and amusing us in quick succession.

The on-stage duo masterfully crafts physical comedy and vocal skill. The performers complement each other very well and have comic timing aplenty.

The jokes are well-constructed, such as their slowly growing yellow hair or the choice of SOPHIE’s electronic music to underscore simulated violence. The only issue is they are dragged out a little too long.

The imperiousness of the clown is present in spades, blended with uncharacteristic anger. Gone are the red noses, but the awkward faces and naked bodies serve the same purpose.

Some lovely details tie the piece together well. The interplay with a “real” Alexa keeps the experimental improvisation element alive, and the use of projection, alongside SOPHIE’s music, keeps the energy up.

This is an indignant show for the politically aware, and a call to arms for a world in turmoil. Amused we may be, and at points reduced to peals of laughter, but informed? Maybe not. The sacrifice of facts for funny means the show lacks solid ground to play on.

Although two women in yellow wigs bulling a robot is hilarious, a missed opportunity to amuse and educate ricochets around the dark basement.