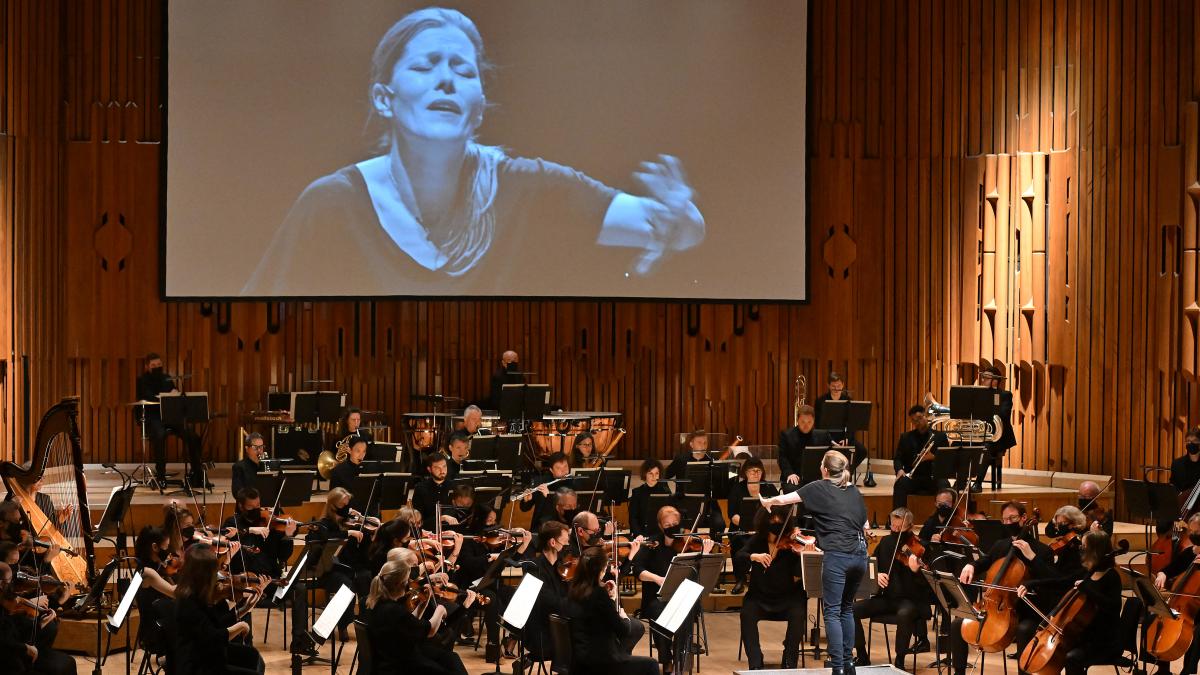 Surrounded by the masked, pointed bows of the London Symphony Orchestra (LSO) at the Barbican, on strides the imposing figure of Barbara Hannigan.

Hannigan is celebrating her recent appointment as the LSO’s associate artist for the next three years. What wonders will they bring?

We begin in the very best place, misery. Richard Strauss’s ode to the destruction of his beloved Munich opera house in the Second World War, Metamorphosen.

Hannigan is clad in a flowing blue silk shirt, and with her conductor’s hat on – metaphorically speaking, she is far too cool for a hat – we glide into the gusting eddies and clouds of this single movement adagio.

The 23 strings circle themselves in endless loops and builds that come to nothing. The piece feels aimless, wandering in a land of loss and longing. Like grief, Metamorphosen peaks and troughs, dropping once again seeming to have gained nothing.

Hannigan’s impossibly long arms and expressive face already set her apart from more stiff conductors, throwing her whole self into the flailing movements. Her intake of breath at sections is audible, pouring such feeling into her role.

If the first section of the evening is emotionally muted, the second makes up for it in spades. Clearly the main event, Francis Poulenc’s opera La Voix Humaine (The Human Voice) is based on Jean Cocteau’s 1928 monologue.

It follows a woman known only as Elle, who is on the phone to an ex-lover as he is about to marry someone else. We only hear the woman, and she is crafted as a mix of slavish obsession and neurotic falsehood.

Hannigan reappears having swapped the blue folds for a plain black T-shirt. This piece needs no extra adornment.

Explained in a rather superfluous introduction, Denis Guéguin and Clemens Malinowski have worked with Hannigan to provide this most unique staging of the operatic experience.

Three cameras are trained on Hannigan and projected onto a massive screen over the heads of the LSO. We start with an out-of-focus image of Hannigan’s hands over her face, obviously in black and white with her back to the audience.

The ringing sounds produced by the percussionist kick us into this extended and fraught phone call from hell. The videography extends the already melodramatic nature of the opera. In rushing French, the English subtitles underneath show us the desperation of Elle.

Despite the heavy subject matter, humour flares up as she is cut off and must contend with the operator at the worst possible moments. She is at points coy and playful, loving and passive-aggressive – a woman at the end of her tether.

Without the man’s replies, the orchestra fills his space, in turns dismissive and inflamed. Both pieces seem to be conversing with phantoms, lost lovers, and lost ideas.

Despite some moments of slightly GCSE art video work, the sections where we zoom in on Hannigan’s mouth are outstanding. Spinning around on the audience at emotional high points, her arms are still conducting the LSO perfectly.

Hannigan seems as though she is effortlessly teetering on the verge of a mental breakdown. To be able to inhabit that role while also keeping an orchestra perfectly ticking along is the reason she is such a unique force in classical music. A little like solving a Rubik’s cube while dancing Swan Lake – deeply impressive.

The repeated covering of her face with her hands and the escalating ‘Hello’s’ from Elle underline her growing hysteria. The music builds and buckles upwards like a spinning tornado, both beautiful and challenging.

Both pieces are an exploration of loss, one of heritage and the other of a life shared. Hannigan shows this sense of yearning both physically and vocally, contorting herself into these spaces of pain.

We leave drained but strangely uplifted by her expansive talent and the combined might of the LSO, which never disappoints.

Check out the Barbican for more mind-shattering performances!