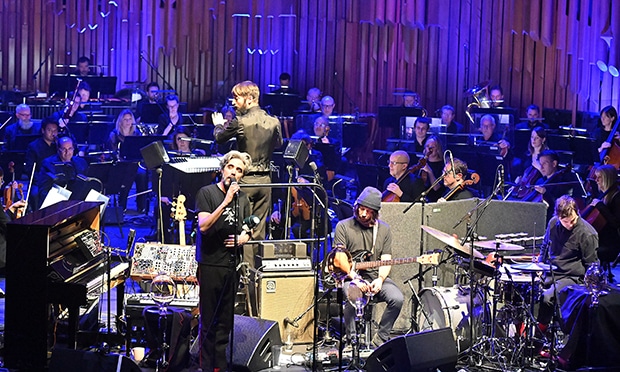 The dark shapes of the multitudinous BBC Symphony Orchestra are broken up by a glittering jacket here and there like scattered gemstones – appropriate for a night filled with moments of bright beauty.

Lit by four large, glass globes downstage, we are introduced to the star of the evening. In a dark suit with salt-and-pepper hair, Patrick Watson, the singer-songwriter from Montreal loafs onto the stage.

Paired with the arrangements by Jules Buckley, Watson’s brand of indie, experimental folksiness is raised beyond his common comparisons (Rufus wainwright, Regina Spektor) and into a realm of its own.

Admittedly, it’s not hard to sound amazing with almost 50 musicians from one of the world’s best orchestras strumming, blowing, and picking behind you. But as an artist your voice and style must remain un-swamped, floating on top of this sea of sound.

Watson manages this, as a gifted pianist and an interesting stage presence. When not playing, his hand is raised to god, fingers slowly twisting, swaying back and forth, occasionally singing into a loud hailer for extra jazziness.

His breathy and at times vaguely flat voice is such a contrast to the pitch-perfect and regimental style of the classical musicians behind him. This blend is why the Barbican’s pairing of popular music stars and classical orchestras work so sublimely.

One song that works particularly well is Beijing, with a special arrangement by Jules Buckley. Watson’s work already uses strings and a diverse range of instruments, so this song about experiencing the Asian capital takes on such depth. The frantic plucking of the string players and the brash calls of the horns conjure up the thumping metropolis.

Despite a rather superfluous intro about travelling in Vietnam, Big Bird in a Small Cage is indicative of Watson’s floating dreamy brand of pop. With swelling strings and deepening horns, this song takes on an even more sombre note.

An encore of arguably his most famous song, Lighthouse, is brought right down to an intimate experience with a focus spot on the man and his piano. His wailing vocals and impressive falsetto sweep out into the dark space.

Bringing on Dana Gavanski as delicate harmonic support, the evening is kept pretty simple – Watson, his band, with Mikhail Stein on bass guitar, Andrew Barr on drums, and the army of the BBC SO.

Despite Watson’s vast musical range, rocky-folky-poppy, some songs within the evening feel a little similar. However, Where the Wild Things Are is a cabaret-infused explosion of sound and feelings that show this musical relationship at its best. Creeping chords of the piano and percussion build and build to a musical funhouse. Strings discordantly shriek and we are pulled up into the sky of Watson’s imagination.

In a world racked by war and uncertainty, communication and collaboration has never been more important. Music may not save the world but it’s a step in the right direction.

With the help of the luminous talent of Watson and the precise skill of the BBC SO and Jules Buckley, we did lose ourselves for two hours, stepping into a world that is infinitely more beautiful and significantly safer.

Patrick Watson, Jules Buckley and the BBC Symphony Orchestra performed for one night in late February, check out the Barbican for more amazing live music..