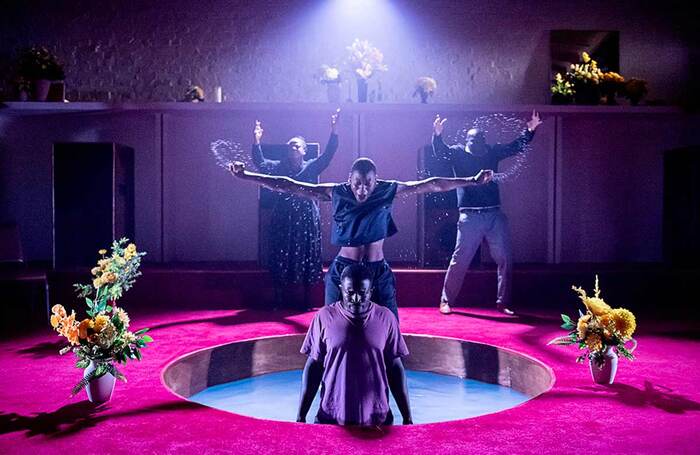 On a red-carpeted platform, a circular plunge pool quietly ripples. But what follows is a far cry from any jubilant christening or happy summer days splashing about in a paddling pool. Myth and Mental health form a treacherous undertow in Dipo Baruwa-Etti’s choppy new play.

Rosie Elnile set echos the inside of a church, fake flowers, candles, cheap chairs, and coral red carpet. Speakers on stage provide umph for the atmospheric score although aesthetically look a little out of place. Literally trapped in the pool Fode Simbo as Kayode battles the world, himself, and his history.

Depression or Demons? Curse or Capitalism? London or Lagos? Kayode is caught between the traditional spiritualism of his native Nigeria and the modern inequality of his home, London. Considering he only has 2 metres squared to move the physical and emotional range achieved by Simbo is staggering. Imagine what he could do with a whole stage! Teri Ann Bobb-Baxter as his wife Kikiope represents a more European view of Kayode’s issues of unemployment and unhappiness. Lucy Vandi as his mother Layo and Mark Springer as her new pastor are convinced of a “festering Hex” that was laid on him as a baby in Lagos.

This delicate domestic drama is passionately acted and makes for an effective psychological culture clash, yet there is one element that elevates it beyond that. A nice dose of terror. Selina Jones towers over Simbo as the manifestation of the demon or mental disturbance. Her movements powerful and fluid, her loping gate inhuman and unnerving. Paired with Ciaran Cunningham’s supernatural neon pink and blue lights and George Dennis’s blasting sound design we have a terrifying physicalsation of a willful spirit. Robia Milliner’s movement direction and Taio Lawson’s overall direction pair naturalistic clashes with physical pirouetting in a watery battle for control. Overall, a simple story of belief vs doubt becomes a visually simulating wrestle for the mind of a young man. Dare a say cinematic? Yes, I do dare! Some moments would not look out of place in a horror film, acts of violence and a creeping sense of dread run steadily downhill throughout.

Jones and Simbo’s interactions early on are deeply haunting. Her long pointed nails appear through the circle of his arms, as they tussle in the spraying water of the pool. Her irreverence and psychopathic changes of mood makes an already biting script spit forth into the space.

Baruwa-Etti is a rising star, being the channel 4 playwright on attachment with the Almeida. Rightly so, this piece is cleverly contrasted, mixing English, Yoruba, rhymed sections, and realistic dialogue in a sea of meaning. Especially when Jones resorts to using the “wild tongue” of English instead of their native one to make herself clear it’s a moment of clever magic. The only issue may not even be one. Hear me out. We are never sure which camp the writer plonks himself down on, and this is made more ambiguous throughout the play. Drawing parallels between the world of science and the world of belief is a hard task. Some confusion sneaks in-between this written diplomacy rather muffling the ending.

In a world of witches and wizards, austerity, and racism Kayode is drowned in the water of his own life. We feel for him deeply, wish him well or pray for him, emotionally invested in his life throughout. This play crosses theological, geographical, and genre boundaries. Bending them all into a whole of complexity and glowing worth. Although I may avoid the swimming pool for a couple of months it will be worth it for having experienced The Unfinished Man, an ocean of a play.

Check out The Yard for more challenging work!