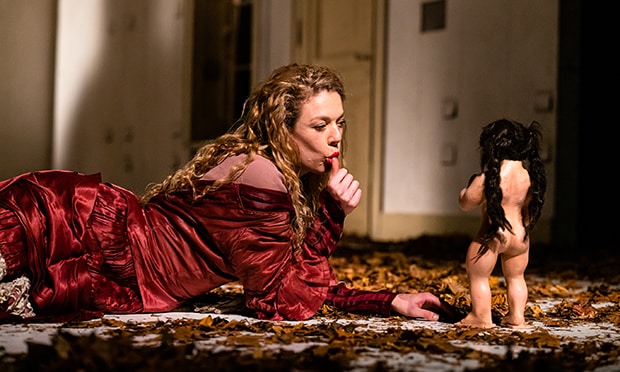 It starts in a strange world – a ruined apartment with whitewashed walls, dead leaves scattered on the floor, a woman in a mauve dress laying in a pose reminiscent of Millais’ painting of Ophelia, and a man sitting by a record player.

In classic Bausch style, the rewinding and replaying of a record of Bartok’s ‘Duke Bluebeard’s Castle’ informs the piece’s jumpy and immediate nature.

Never held down by narrative, themes of pain, devotion and trust are all explored in a defusion of movement and meaning.

Equal parts horror and beauty, the story of abuse and murder keeps its visceral and immediate clout.

The French fairy tale by Charles Perrault of a matricidal maniac is rethought within the opera as a whimsical exploration of forbidden rooms, all drenched in blood.

This aggressive but beautiful nature of the piece is one of its most magical elements.

Another high point is its humour.

When I think of Bausch’s work, I don’t immediately go to comedy, but Bluebeard is filled with dark, intelligent humour.

From the neurotic obsession with the female performer’s hair – there is a wall of it, people are whipped by it, and it is constantly flicked this way and that – to the sequence in which male performers strip down to satin underwear and begin peacocking at the front of the stage.

It’s a side-eye at the opera’s medieval setting and the gender roles that persist even today in all their damaging prowess.

Amid the thrashing, contorting, physical pain and anger, there is a comic vein which is mined steadily throughout.

Visually, the piece is stylised chaos.

Rolf Borzik’s set gives the impression of death and wasted wealth without any unnecessary embellishments.

His costumes again conjure up the medieval but are shed like snake skins to reveal slips of pure silk and the aforementioned satin briefs – ‘Where can I buy these?’ I ask the internet.

Along with the ever-shifting leaves, the fabric moves over the taut bodies like ripples on a pool, accentuating their movements and grounding them in a sumptuous aesthetic.

Bausch was always fascinated by groups, and although Bluebeard and Judith (his new wife) are a central vortex from which the chaos branches out, the rest of the company are never just in the background.

The final image of Judith’s body, covered in all the heavy dresses of the fairy tale and being rocked along the ground by Bluebeard, is harrowing.

This central relationship carries the piece and is a constant thread running through all the madness.

The “relationship” holds a warped mirror up to the audience, forcing them to question their and their partner’s foibles, though hopefully these do not involve murder.

The only fly in the ointment is almost a compliment.

The piece is clever, well danced, experimental, funny and harrowing – to be reductive, it’s very good. But like that schoolmate who could sing, dance and get perfect grades, and who you tried not to hate, the company knows it.

The length – it’s always a touch too long with Bausch – and the confidence throughout is grounded, earned and fair but still a little irritating.

Nevertheless, Bluebeard is one of the many reasons Bausch is so well respected in the theatre community, and the company that keeps her flame burning does justice to her legacy.

I was shocked, enthralled, elated, entertained and a little bit tired by the whole evening. And I left the theatre feeling a little uncomfortable with the humanity surrounding me – classic Bausch really!