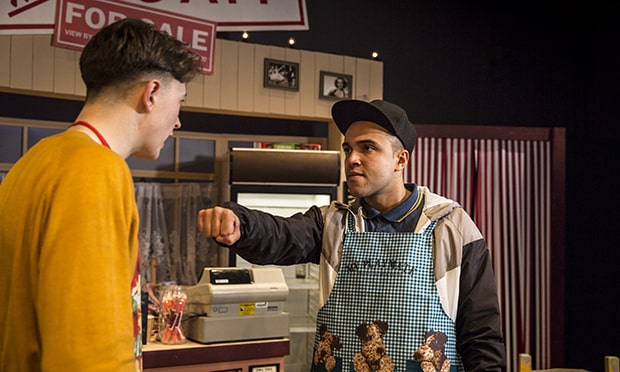 A mixed bag can be both a blessing and a curse, filled with delights (lemon sherberts, for example) and disappointments (liquorice allsorts).

James McDermott’s new play, Time and Tide, running at the Park Theatre, is a selection box.

The show follows a small, struggling Norfolk community and is set completely in May’s cafe on the crumbling Cromer pier.

Encompassing various generations and their worries, the play captures the desperation of LGBTQ+ youth, or anyone really, to escape small-town life and try to make something of themselves.

Identify, friendship, home and community are the focus and McDermott’s writing is witty and sharp.

There are some stand-out performances.

Paul Easom charms as Ken, a blundering delivery man pining after May.

Wendy Nottingham as May is warm as the matriarch supporting two boys with their future plans while indecisive about her own.

Josh Barrow, playing Nemo, perfectly depicts the feeling of entrapment and terror of leaving your home town for the bright lights of London. He is simultaneously excluding from rural life but also very much a part of it and this dichotomy is interesting to watch.

Elliot Liburd, although at points a little clumpy as Nemo’s laddy best mate Daz, pulls off the character’s inner fear about his feelings for his friend.

Caitlin Abbott’s set is cute and functional and, despite the cramped space, the cast do well with a dialogue-heavy script.

So that was sherbet lemons. Now for the liquorice allsorts.

The accents throughout fluctuate in accuracy. At points, we get that classic Norfolk drawl and elsewhere we dive into a West Country lilt.

Rob Ellis’s direction keeps the action flowing but leaves something to be desired when it comes to naturalism, and there are some small holes where the activities of the characters don’t make much sense.

Furthermore, although the play is billed as a comedy-drama, the plot is rather predictable.

Sweet at its core – some might call it saccharine – and uplifting, the final twist looms large from the first act, making the whole process feel a touch inevitable.

Nevertheless, like Four Weddings and a Funeral or Bridget Jones’ Diary, the lack of shocks doesn’t mean you can’t enjoy the show.

Time and Tide is entertaining at its heart.

So what if characters argue for almost 15 minutes while doing the same simple activity?

The play is a touching look at a community, the plight of small towns and people in flux, and shows that change is integral but not always negative.

Time and Tide runs until 29 February at Park Theatre