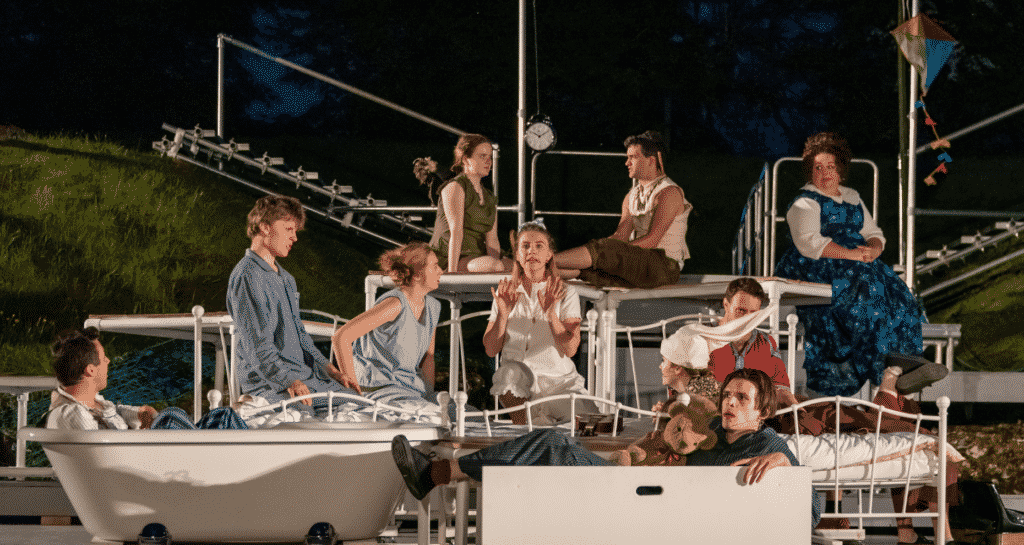 Visit an almost 2000-year-old, outdoor theatre, in June? What could possibly go wrong? The Maltings Theatre’s ambitious adaptation of Peter Pan set in the mossy ruins of the Roman Theatre gets you smiling, even through the rain.

You cannot get a better pedigree than the Roman Theatre in Verulamium (St Albans). Being one of the first in England and unique in its architecture it is a setting most companies would dream of using. Of course, the unpredictable British climate, and the mounds of worn bricks and grass do provide their own challenges.

Adam Nichols and Sophie Swithinbank’s adaption of JM Barrie’s novel is a confident one.  Along the lines of a Disney ‘musical’ with only about four or five songs thrown in, I wouldn’t quite class it as a piece of musical theatre. However, there is a nice highlighting of Mary Darling’s feminism/suffragette work, and by framing Tiger Lily’s tribe within that lens the problematic tropes of the film (and book) are gracefully sidestepped. Of course, there is all the classic ‘childlike purity’ guff you expect, but it is offset nicely by the writer’s imaginative flare. Although the use of Northern accents for stupid characters is a little grating, the story is bright overall.

The thing that swings this piece is the actors. A more energetic performance is hard to come by. Emma Wright as Mary Darling/Tiger Lily is a clear and controlled performer who focuses the action away from Mr. Darling and devours up most of the best lines. Anna Franklin (a returning Maltings theatre performer) is a lovely Mary Poppins-Esque narrator, allowing the lyrical script to fill the night air. Flora Squires as Wendy has a delightful singing voice and does not overdo the ‘childlike wonder’-shtick. Felipe Pacheco is a great physical comedian and athletic Peter. Marcus Churchill as Hook has an effeminate take on the role but lacks the menace to really land the characterisation, while Matthew Parker’s Smee is a bumbling northern buffoon, overdone but funny. The Lost Boys together are bouncing balls of fun, and considering that some of them play their instruments on stage the level of talent is high.

But we can’t just fly off to Neverland, can we? There must be some earthy truths to contend with. Some of Nichols’ creative choices are a little perplexing and although this is a children’s play, the little devils are sharper than you think. Firstly consistency: Tinkerbelle at first is invisible and portrayed using sound effects, then two scenes later she is portrayed physically by Paula Gilmour in a rather sad set of wings. Secondly, the musicians are relegated to plastic boxes that look like portable greenhouses on the sides of the stage, that although practical rather ruin the ancient sightlines.

Lastly, the venue itself: with such an unusual and massive crumbling structure like an amphitheatre, the practicality of presenting a play is immense. Staging an all-singing, all-dancing, all-flying production of Peter Pan with a medium-sized budget and cast is almost foolhardy. There are many children’s plays that are less demanding, or even more fitting to the historic location. Simon Nicholas’ set is a simple set of metal cages and, although there is a nice use of levels, the all-important flying sequence is rather disappointing. It felt at points like the setting was hampering the production and not enriching it.

Nevertheless, when it worked it worked. The sun setting, reflecting off the little golden flowers that covered the hillocks is a moment impossible to recreate in a standard theatre. Regrettably, as the rain started to patter down on our unprotected bodies, the peril of outdoor performance raised its ugly head. But come rain or shine the energy and perseverance of the creatives and actors involved was palatable. Feeling the long history of theatre reverberating off the ancient stones warmed even the coldest audience members. Third star to the left and straight on till morning indeed!