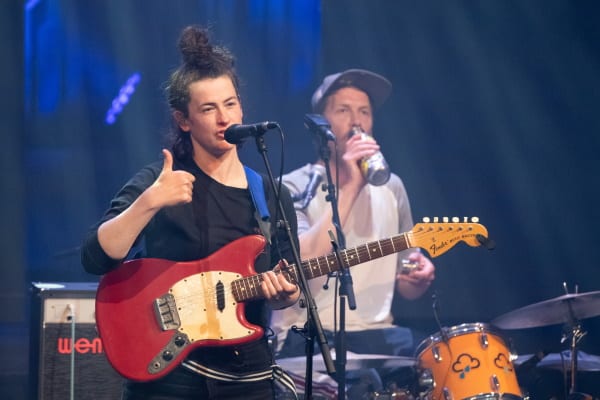 Live from the Barbican

A little late and flustered I bumbled into a full (yet distanced) Barbican Hall, settling in just as Kate Stables (we assume the eponymous Kit) and the band arrive on stage. Surrounded by a younger, slightly hairier audience I am indoctrinated into the soft-cult-like experience of a This is Kit gig.

Being featured heavily on BBC Radio 6 music, along with playing in the TV series Wanderlust they are in no way under the radar. But there is something unknown and a little religious about their loyal returning fans as the relaxing/cutting lyrics and whoops of Stables’s voice fill the air.

The affair is visually stunning thanks to six large screens with intricate projection by Pete McPartlan and Peter Todd. Unique and created specifically for each song, we get spinning paintings, stop motion, and some lovely kaleidoscopic mirrored footage of deserts and forests. With creative use of strip lights in a loose cage around the band and the addition of a talented trio of horn players (Lorenzo Prati on tenor saxophone, Pete Judge on trumpet, and Sam Hayfield on trombone) we are somewhere between music and theatre.

Stables vocal tones are pillow-soft, but with the razor-sharp clever lyrics and bouncing electro-folk backing the effect is cool and laidback. Stables, Neil Smith (on Guitar), Rozi Plain (on bass/vocals), and Jamie Whitby-Coles (on drums/vocals) look like they have sprung from a house party in Brooklyn to land in central London. Stables is an endearing stage presence, keeping the funny chatter going as she tunes and retunes the many guitars she uses throughout the evening. 3 guitars, 3 horns, and 3 other band members, along with merchandise and mention of the third eye. A cult you say? Well, only a very chilled-out one.

Waves of complex sound wash over us as Stables distinctive trilling voice laps at our eardrums. The horns as always add punch and weight to this rather floaty sound as we deep dive into their new Album Off Off On. Was Magician is a lovely song with a Laura Marling-esp mystic sense to it. This is what you did builds and builds as the closest the band gets too a frantic (still very relaxed) crescendo. Slider has saxophone heavy sounds from Prati that will melt your soul. Coming To Get You Nowhere utilises the horns in force with growing scales at the start, a catchy guitar basis, and simple chorus that typifies This is Kit’s appeal. Contrasting that with the vocal sadness in Carry us Please with its wailing, more lamenting sound always with the ticking sounds of guitar underneath and you have the range of the band’s abilities. Ending with Keep Going the sentiments of strength in the face of adversity are felt keenly as the title is repeated, mantra-like.

Although some of the songs do blur into one another the whole evening takes on an ethereal quality. Stables reedy soprano guides us through the trippy and relaxing journey, topknot bobbing on her hand as she bounces around the stage barefooted. “we’re all different aren’t we, but that’s alright, it’s good to be different” I could not agree more Kate!

Amid quotes from Withnail and I, adorable mistakes and restarts, and the ever-repeated tuning of guitars we feel friends with the band and Stables particularly. Again, the excitement of the performers is present in buckets, but as the whole of the Live from the Barbican series prove the magic is in elevating a band/artist’s music and adding other creative minds to bring a deeper connection to it. I echo Kate’s sentiment as she reiterates her thanks to the venue for its ongoing commitment to music, theatre, and art. Thanks a bunch, guys, to another 39 years and more!