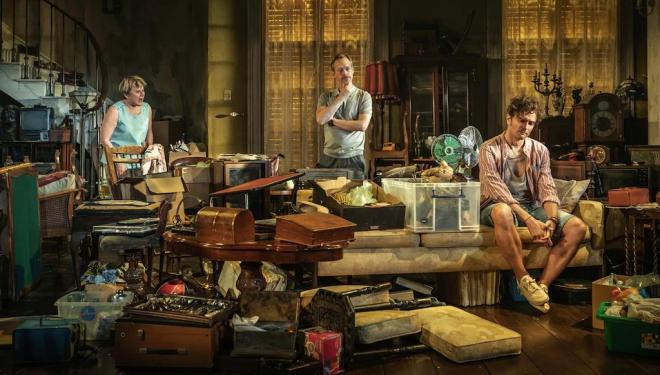 The great tradition of watching a family be horrible to one-another is given a fresh undercurrent in Branden Jacobs-Jenkins’ 2014 play Appropriate. With a venomous performance by Monica Dolan, this piece burns with resentment, misery and prejudice.

Following the death of their father, three siblings return to their plantation/mansion in Arkansas to hammer the resentments of the past out of each other, and to try to save their family from financial ruin. So far all classic American drama tropes, but Jacobs-Jenkins cherry-picks from the old and then adds his own twist. We have all the southern charm of Tennessee Williams, the vicious verbal battles of Edward Albee and Arthur Miller’s symbolic irony. The Lafayette family uncover evidence of the dark past of their home, and the role it played in slavery, and how this horrific period of history has affected the American psyche. Appropriate focuses on more modern structures of families, and their relationship to tradition and one another.

With the deafening sounds of cicadas (what else), the action is concentrated in the cluttered living room of ‘The Big House’. Fly Davis’s set is detailed and fitting and coupled with Ola Ince’s meticulous direction, the whole piece takes on an air decay, symbolising the rotting in the house that is slowly falling apart (both physically and symbolically). Allowing for the searing writing to create atmosphere and tension, Ince’s direction crafts a clever piece of theatre. The added sense of doom created by ghost-like happenings brings in echoes of The Woman in Black, which overlays an interesting dynamic into the naturalistic play.

Like with any psychological drama from Henrick Ibsen to Tracy Letts, the pressure is really on the actors. Without anything massive happening plot-wise, the character development and clashes are the meat of the play. Dolan playing Toni gives a glorious mix of Martha from Who’s Afraid of Virginia Wolf mixed with Masha from The Seagull. Bitter, aggressive and broken, this is a difficult role as it is all bark and bite. Edward Hogg and Steven Mackintosh playing brothers Franz and Bo provide their own brand of crazy with equal skill.

The themes of drug abuse, familial shame and betrayal dance with all the genres tropes we know and love so well. “Can we sit around being dysfunctional later?” is the line that best captures this. Besides this sibling trio, their spouses and children are also thrown into the mix. Jaimi Barbakoff’s portrayal of the innocent Rachael, pulled in by her marriage to Bo, is very easy to empathise with. Tafline Steen is beautifully naive as hopeful hippy River, Franz’s fiance. Not a hair is out of place when it comes to performance and for a play that is 95% talking, 5% brawl, the time flies by surprisingly quickly.

The only very small bee in my bonnet is the ending. For a piece that builds in creeping tension, unhappiness and volume, the crescendo comes too early in the second act. What follows is a rather quiet scene of monologues and a rather confusing, if impressive, sequence of tech where the house collapses. For such a fiery piece, this ending is a touch underwhelming.

Despite that, the overall effect asks questions about the history of the south and America as a whole, the role of family, and what really is appropriate. With drugs, crying, sex, shame, racism, mental illness, screaming and hair-pulling, the Lafayette’s self-destruct gloriously. This plunge into the human psyche may not come out with any concrete answers, but it’s one hell of a ride!

Appropriate is playing at the Donmar Warehouse until 5 October