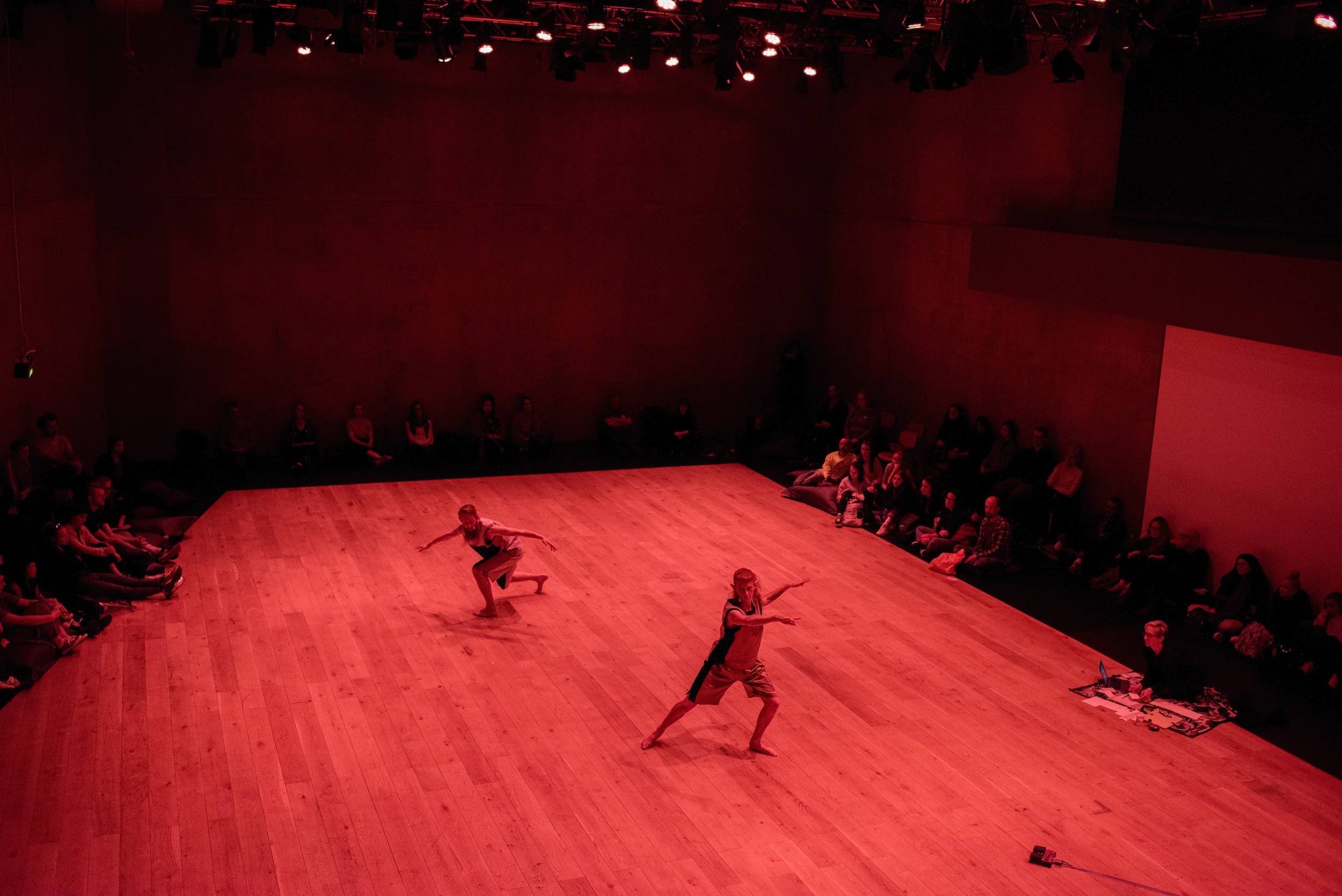 Sadler’s Wells should be rightfully proud of its championing of the new, fresh and unusual side of dance. The Lilian Baylis studio is normally where this wacky world flourishes, a hothouse of creativity if you will. Matthias Sperling’s London premiere of his 2019 piece No-How Generator is certainly an experiment, one that ends not with a bang but a whimper.

The large black box has been gutted, the seats moved to either side and a school hall-like pale wood flooring laid in a rectangle. As we descend the stairs to ground level we are greeted by Sperling and Katye Coe in basketball uniforms with elf ears on, sat on the floor. Bean bags and cushions flank the space on two sides and mean a small tussle for the back row of chairs. Thankfully I elbow an elderly lady out the way to grab my rightful reviewer’s place (joking).

They introduce the artist SERAFINE1369 (Jamila Johnson-Small) who is sitting on the floor upstage. Next to her a black skeletal human spine (presumably fake) with A3 paper splayed out in front and a serious expression on. My heckles rise but I persist. I am an open-minded chap. I love the weird, the monotonous, the experimental, I sit through Pina Bausch by the hour and argue with my partner defending nudity, screaming, or overly liberal fake blood usage. I can enjoy this I tell myself. Turns out, I can’t.

Billed as a ritualistic performance that connects scientific perspectives with magical ways of knowing. The piece asks “If knowledge-generation is a fundamentally embodied process, can we see and experience it happening in a dance performance? Here we go. I assume the answer they come to is yes. Maybe the magical way of knowing is what the elf ears are for? If so that’s funny. But that’s about it humour-wise.

What follows is a repetitive, overly pretentious, and visually waring example of navel-gazing. Joel Cahen’s soundtrack is nightmarish, a spooky hippy dream that builds at times to orgasmic moaning, mixed with ethereal oohs and ahh and vermin-like scratchings. Both performers have mics to pick up their breathing but do not create the simplistic sound effects themselves. Jackie Shemesh’s changing lighting states do their best, plunging us into a red wash, then blue then yellow. But seeing as there’s no progression and no crescendo the changes feel automated.

The waves of sound push backwards and forwards and all the movements are based on this twisting of the body. Swaying, rocking, back and forth ad infinitum. Presumably, this is something to do with the embodied cognition mentioned in the blurb but clearly, I am too slow to pick that up. SERAFINE1369 is scribbling industriously away so she gets it. Hypnotic, like waves on a sea the dancers go up and down, and up and down for a full hour.

Starting the pair rise (very slowly) from the floor sometimes coming together in a rather stunted attempt at contact improvision. They run around the space in shapes of 8, sometimes going backward and sometimes going forwards. Finally, it’s over, they rest back on the floor again and smile congratulatory at one another, and then at us as we clap and head back up the stairs.

Experimentation is important, and I am all for art blending different genres, but they have to realise is that the audience are not mind readers (sadly). We do not know the complex research and alchemic process you have undertaken unless you make it pretty clear to us. As I leave, I glance over and see SERAFINE1369’s stunning pen drawings of joints and pelvis and reams of written work. This encapsulates No-How Generator for me. All that beauty, talent, and creativity hidden from us in the corner, never shown. The idea of creation for the sake of creation is philosophically admirable but visually it is deeply frustrating.