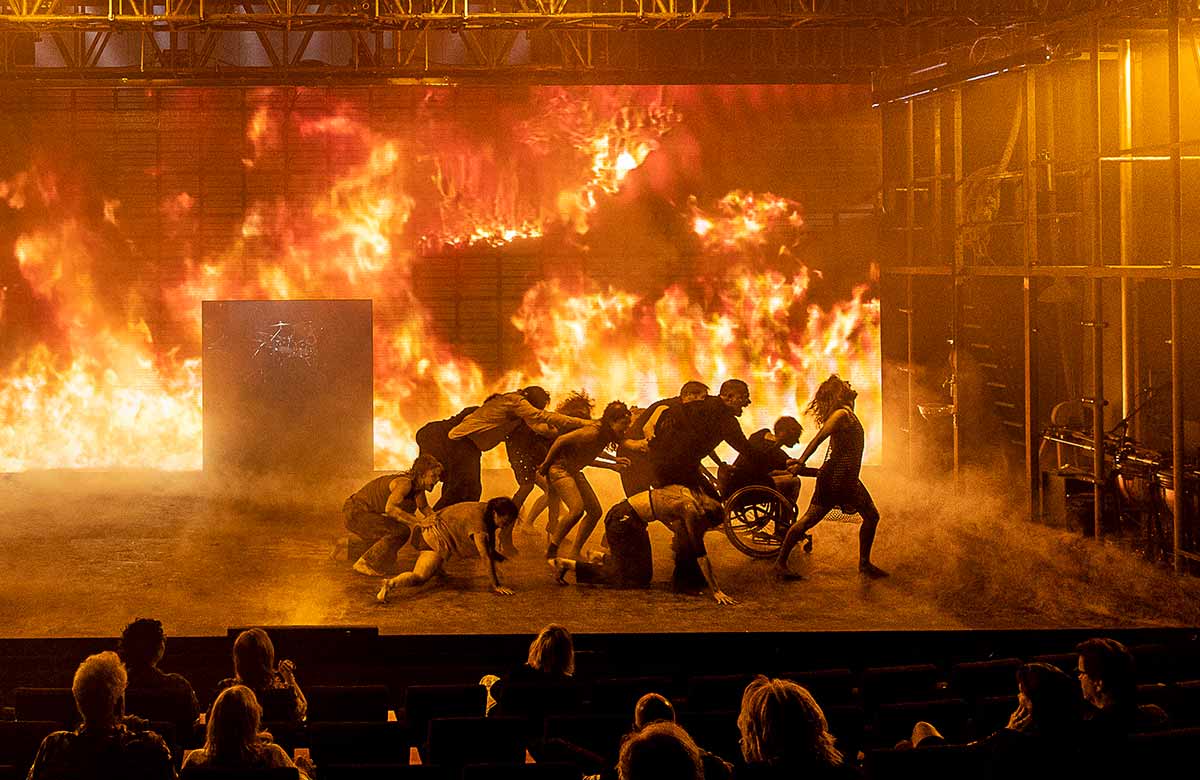 Some would argue we are living in the age of rage currently; scorched land, storm clouds on the horizon, and the constant scream of the internet. But the ancient Greeks, and more specifically the great tragedians step up, “hold my amphora of wine” they claim, we’ll show you rage. Prestigious director Ivo van Hove rises “Ohh you want fury” he cries “I’ll give you the multipack!”

So on a stifling Thursday evening, we pack into the Barbican theatre, greeted by a man cutting up body parts and grilling them on a real fire. Here we go indeed. Almost 4 hours of heavy-going danish/greek tragedy is our prize (or perhaps our punishment). Weaving together 6 already linked Euripides plays and one by Aeschylus, we are treated to; genital mutilation (x2) blindings, stoning, incest, genocide, warfare, and murder on murder on murder on murder. It’s the idiot’s guide to killing your family/friends/rival city-state in the way that only some old greek dudes know-how.

But that’s unsurprising, isn’t it? Pushing together 7 didactic plays forged in a warlike world about the evils of disobeying the establishment will mean…blood will be spilled. Despite the obvious language barrier and the constant eye darting needed to understand the dutch (via opera subtitles), many performances bridge the gap. Chris Nietvelt as Clytemnestra and her sister Helen encapsulates all that’s best about the show. Tall, striking, in two different colour sequinned dresses and knee-high boots her posture grotesque. Like a predatory spider casting shadows across the stage. Hélène Devos as Hecuba and Elektra has a desperate intensity, a shrieking fire fitting for her bright red hair (as Electra). The menfolk rather embrace the stock hero a little too much and stand tall but forgettable as masculine statues. Minne Koole as Orestes tries to break this frigidity with his descent into madness but the female characters overall grab the pupils more.

It’s the visual sense that sets this show apart and makes the almost 4 hours if not enjoyable certainly interesting. Jan Versweyveld’s jungle gym of black pipes and massive arching LED screen is quite a sight. The literal mire of mud in the second act, the showers of blood and flying bodies whisked up into the gods. Like the many rock musicals before it (Jesus Christ Superstar for one) the edition of Hannes Nieuwlaet, Yves Goemaere, Ward Deketelaere (heavy metal musicians), and live percussion heightens the violence of the tales. Shaking the theatre’s very foundations.

Versweyveld’s lighting is stark, brutal, and unforgiving, his set functional but also overly busy, with wonderful elements thrown away in a corner. A bubbling blood trough leading to a darling little blood sink is used to great effect by the actors to wash their hands dirty. But is hidden at an angle to be almost invisible to most of the audience. WHY? Give us what we want…which in this case is a bubbling blood water fountain.

The perplexing choices don’t stop there. Rightfully so dance is used in the piece as it would be in the contemporary staging. Wim Vandekeybus’s choreography is messy at best, and painfully unimaginative at worst. The lack of synchronisation makes the group sections draining. Looking more like me after 6 martinis, the dancer’s movement feels unconnected to the themes explored, and that vagueness is distracting.

Van Hove has got lost in the details of this piece. Seemingly unable to say no to anything. As we know juggling too many plates means that eventually, some come crashing down. Simple mistakes like having stagehands (walkie-talkie visible) uncomfortably moving set pieces in full light, or not making muti-rolling clear enough to the audience. One greek play is complex enough, 7 jammed together with the same actors, now that’s a Herculean task (see what I did there?).

The themed of “masses are monsters” and that revenge is definitely….good?…BAD! I mean bad! As the curse runs from father to son, daughter to knife-wielding daughter. All the theatrical magic, storms conjured on stage, fields drenched in mist, faithfully recreated slaughter don’t detract you from asking why. Why 7 plays? When 1 would (if done right) have the same effect just more concisely. Would you sit through 7 Shakespeare’s? 7 Sarah Kane’s? 7 Christmas pantos? Although I lived to tell the tale of the septem greek tragedies I’m not sure if I would recommend the experience. Although this cauldron of rage is undeniably a potent brew.

If you want to see more searing theatre check out what’s on currently at the Barbican Centre here!