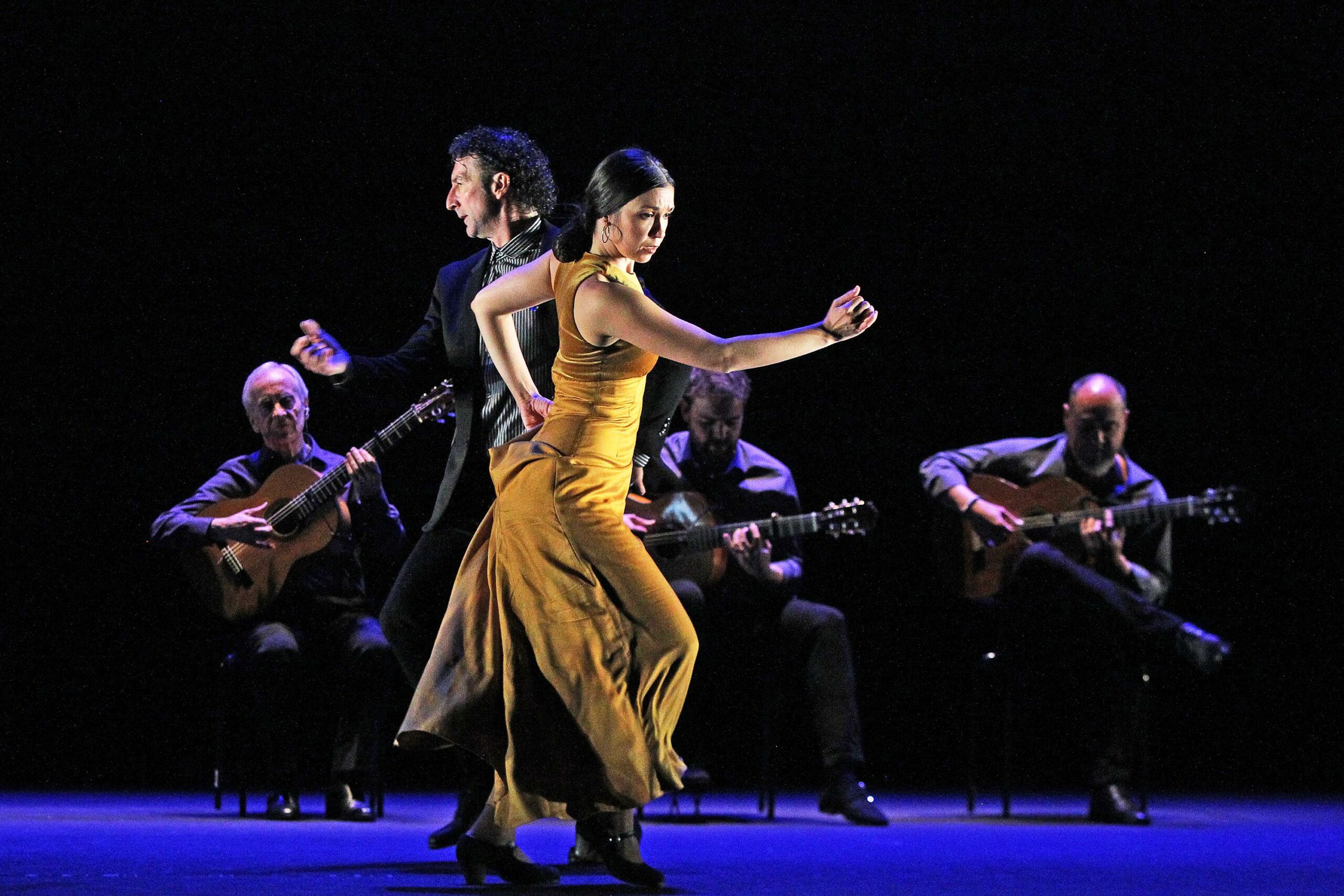 I love a good drink. After all, I am British. So, a show based around solera (a system of aging fortified wines by adding younger wines to mature wines to create a perfectly-aged blend) is going to go down a treat. The deeper concept however is untranslatable and forgotten in our cold rainy lexicon. The idea, applicable to art, architecture, and clearly dance is mixing the energy and rebellion of youth with the experience and talent of age.

Paco Peña, award-winning guitarist, composer, producer, and artistic mentor, the duke of flamenco leads this charge. Crafting shows on topics diverse as the artist Julio Romero de Torres and the Spanish civil war. His work stretches back to the 1960s when he dazzled audiences in the likes of Ronnie’s Scott’s and The Royal Albert Hall, you know small fringe venues. A true emissary for this passionate art form and a firm believer in its flexibility and scope, along with a simply heavenly guitar player.

The show starts in a rehearsal room, with the musicians and dancers in loose-flowing training clothes. Waiting for busses and milling around in the space as if we the audience are hiding behind one of those rehearsal room floor-to-ceiling mirrors. What follows is a series of miniature pieces, experimental and lively, exploding out of the group. ¡Ole!’s, muttering encouragements in Spanish, clapping feet, and tapping toes keep the energy high but informal for this normally heavily adorned dance form. The joy and appreciation of each other’s abilities warm the audience’s faces like the hot sevillanos sun.

Peña’s guitar playing is otherworldly, making trills of sound I have never heard from a guitar, hunched over with a red scarf slung around his throat. Bringing up the youthful side of this collaboration Gabriel Matias is all sultry and sensational energy. The Brazilian dancer stalks and stomps his Cuban heels manically, but embraces the softness allowed by male dancers in flamenco. Adriana Bilbao the only female dancer captivates especially in the sections with the classic traje de flamenco. Her solo where she kicks and flips the layered train out from under her, looking like the tail of some terribly stylish dragon is addictive to watch. Blending with some mature talent, our final dancer Ángel Múñoz has an intensity of performance and a serious presence on stage. Cat-like in his movement, graceful yet determined. His strength and solidity contrast with Matias’s flashy showmanship nicely. Balancing perfectly in a triangle of skill.

But what would flamenco be without cante flamenco (the singing)? The cries of pain, the screaming Arabic inspired wailing, the heart-crushing agony, and despair. Inmaculada Rivero is the embodiment of this, wrapped in a black shawl with big gold earrings she calls into the night, her voice raw and reeling.Iván Carpio her vocal counterpart equally blasts out the notes, filling the space with emotion. Dani de Morón and Rafael Montilla are both gifted guitarists, duet and complement Pena although remain a little in his shadow. Julio Alcocer keeps everyone in line with drumming, box banging, and ticking of percussion.

Acclaim director Jude Kelly cleverly crafts a show of two worlds. The initial casual, but deeply impressive first act, and a more polished, costumed but sadly less interesting second act. Fernando Romero’s choreography is more complex in the second act, and his group work shines. Tom Wickens’s lights slice the space into intimate and more overtly dramatic settings. This is the “give the people what they want” section and is certainly more visually impressive. Carpio in a black suit, under a fretting prison-like lighting effect singing a song of incredible pain, is an image not easily forgotten.

This interplay between established artists and younger ones proves incredibly fruitful. From collaborative rehearsal to the executed performance this collection, brought together by papa Peña revels in each other’s artistry and individuality. British people sometimes need to be reminded of what passion within art really looks like. Solera does this, proving that the current of life may change as we get older, but it never loses its urgency, strength, or potency. Bob along that river, and who knows where you’ll end up.