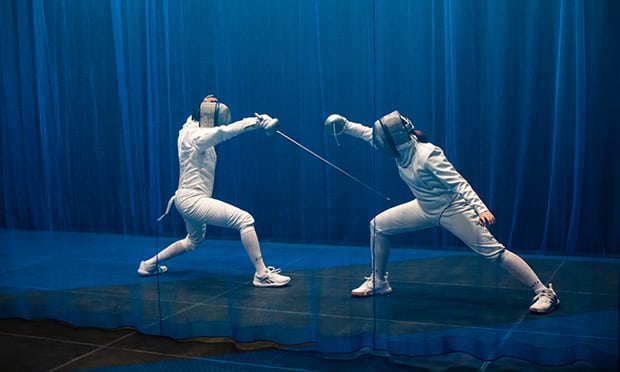 The Yard is East London’s trendy little minx of a theatre. The intimate space is cocooned by the hubbub of Queen’s Yard, all fairy lights, and cool-concept restaurants.

Gardner’s 2018 play has pulled her across the pond, with the National Theatre, Theatre Together and the Golsoncott Foundation bringing it to Britain.

The Yard’s petite, chipboard amphitheatre is alive with chatter, and we get plenty of time because the play is almost 15 minutes late in starting.

What greets us is a snappy and violent tale of the culture of competition in the US and the difficulty of friendship in the modern world. If that sounds too static for you, it’s all set in the cutthroat (far too easy) world of competitive fencing.

Ingrid Hu’s blue curtains leave the space refreshingly clear, relying on the fencing costumes and Marty Langthorne’s transportive lights to focus the action. Metamorphic light is certainly needed as the play is set almost entirely in a fencing club and is pretty dialogue-heavy.

Gardner’s prose is biting and intellectual, even if it sometimes falls prey to being overly symbolic and at times unrealistic. With the help of the actors, she creates characters with attention to detail and a delicate understanding of the human psyche, crafting two adolescent girls from very different backgrounds in a rather strained waltz of friendship.

With such a stripped-back performance, the pressure is on the actors.

Grace Saif as Mary Wallace, the hard-working postmodernist “good girl”, gives a knockout performance, nailing the accent and imbuing the heavy script with a lightness and teenage false confidence.

Across from her, Millicent Wong is the fiery and complex Athena. The juxtaposition of Wallace’s suburban privileged life with Athena’s urban inner-city existence means the two are constantly at loggerheads as well as crossing blades.

In the battle, Wong’s performance also gets a little tattered. Her accent fluctuates in strength and she struggles with her character’s grand statements and peculiar notions.

Amaia Naima Aguinaga as Jamie, although only appearing briefly, works hard with her limited lines.

Grace Gummer’s minimalist directing style is a blessing and a curse – a little like finding the bin in your friend’s spotless Nordic kitchen.

The lack of fluff and fuss means Gardner’s lyrical talent is on full show. But with the show consisting of (impressive but long) fencing sections and talking, it’s hard to build the characters up to an appropriately effective crescendo.

Although the message of growth and friendship are heart-warming, the lack of thrust means the evening does start to drag.

Nevertheless, Gardner and Saif are two to keep a beady eye on, whether it’s on this landmass or the one over the pond, because among the swishing blades they both strike at the heart.