A Womb of One’s Own 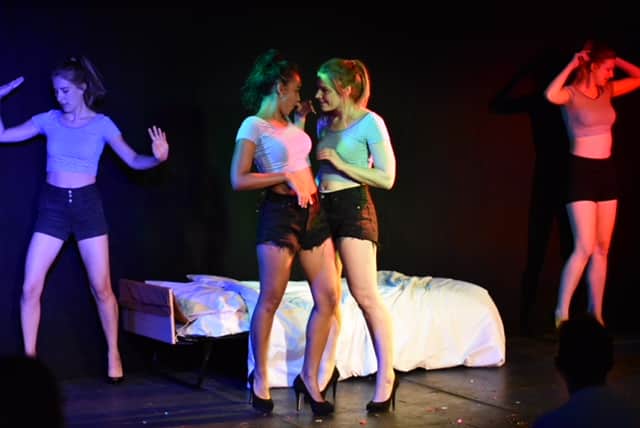 Sex is a tricky subject universally, over-saturating almost every walk of life, discussed and pursued to the ends of the earth; it can be a minefield for a theatrical piece. Add in the twist of talking about unintentional pregnancies and abortion while being humorous and you have a near-impossible task! In this small category of effective pieces lies A Womb of One’s Own. Bright, clever, impactful and brilliant, it treads the razor wire and comes out unscathed; this is theatre at its cutting edge.

I may be getting ahead of myself, but this is a magical show. The things that could have been improved on were minimal and minor, but let’s get them out of the way first shall we? As with any show that is so blue, filthy and openly irreverent, there are some jokes that don’t quite land, although they are nestled in a bed of perfect comic timing. Also at times the wonderful idea of having four actors play different facets of the lead (think a very grown-up Inside Out) this could have done with some more definition, and maybe overall a little more work would tighten up the show. Another point that I guess would count as a negative is Claire Rammelkamp (writer and actor extraordinaire) who shines so brightly that she can overshadow the other actor’s sterling performances. But then again, proving that you can write and act in a piece is a rare and impressive feat. There is also a rather cop-out funny ending that is a little overt for my taste, with an all’s-well-that-ends-well feel to it that is at odds with the hard-hitting piece. But these as I have said before, pale in comparison to the brave, well-executed gemstone that is currently running at The Kings Head Theatre.

But why so good? What constitutes greatness? Firstly the Sushi knife-sharp writing of Rammelkamp! It’s crass, it’s real, and it’s utterly refreshing to see a woman talk openly and without restriction about sex. It’s 2018 and progress has been made, but for some audience members, it is still clearly shocking when they see women openly talking about something so primal. This show bulldozes our preconceptions into the dust. Secondly the reality of the show, we have a repressed but modern women talk about her sex drive, sexuality, family pressures, grief, religion and fear over being pregnant so early in her life. We have all felt these emotions in some form or another and to see a clever and still amusing description of them is blast of fresh and much-needed air. Thirdly the subject matter, even in our modern world the prejudices of abortion are prevalent and rampant and with Ireland only just voting on women’s rights over their own wombs, this is very current. What struck me while watching the show was the unwanted opinion and pressure, pain and unnecessary trauma subjected to women over the choices they make over their bodies. Delivering all of the above points, but also making us laugh? It is almost too much to ask for; A Womb of One’s Own holds you in the heart and mind of the protagonist and carries you through the trials and tribulation of a young woman with grace maturity (and a host of fantastic innuendoes that I only wish I could quote here!) Virginia Wolf herself would be proud of a show with such wit and pace as this show blows a hole in the theatre world with a sharp tongue and an even sharper mind.

It’s pretty safe to say that I loved the show because I feel that making a show funny is quite hard enough without having the subject matter of abortion on top of that. I would say that maybe this isn’t the show to take your mother to, but then again, maybe it is the best show to take your mother to! Yes, it is foul-mouthed and filled with sex, but so is life! And it is rare to find such a frank, open, uplifting and rounded insight into the issues facing one-third of the female population. Abortion is a difficult subject, but somewhere amid the blue humour this show has something incredibly important to say and somehow has fun saying it. I left informed, and with a massive smile on my face and I urge you to get to The Kings Head Theatre and do so yourself!