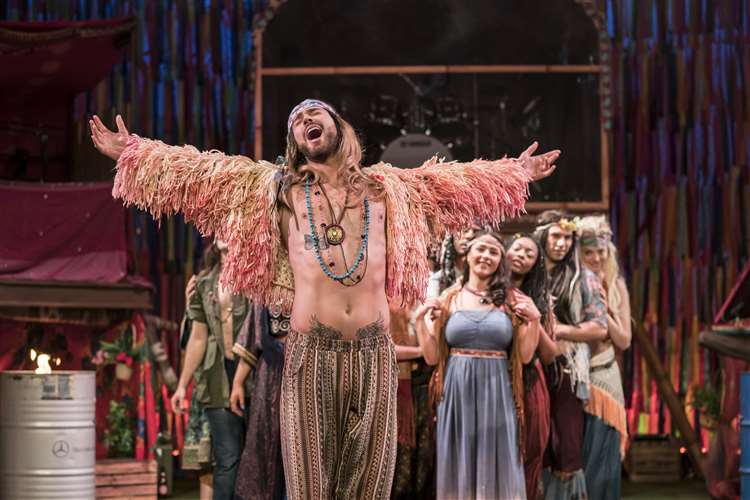 Kicking off the fiftieth-anniversary production, Hair grooves into the night as the audience is left breathless, entertained and flummoxed. This musical whirlwind touches ground in the New Wimbledon Theatre in the first leg of its UK tour.

With its many historical layers (sorry, first and last hair joke), many people have a connection to the revolutionary musical. Transferring from a more appropriate fringe venue like The Vaults brings its problems for the counter-cultural slice of the 1960s. The sound quality and the rather dreadful American accents mean that a lot of the wonderful lyrics are lost. Although the overall exploration of the Anti-Vietnam war movement and the lead character Claude’s (Paul Wilkins) struggle with conformity are communicated, a lot of nuance is lost. The sporadic exploration of the themes of the time, strung together with a loose story, becomes confused and muddy.

Interestingly that doesn’t matter as much as it should do. This production is joyous, bright and infectious. Slick and well-structured, the show has the feel of an expensive Broadway musical which is ironic considering its Off-Broadway fringe inception in 1967. The songs themselves are well written, iconic and good enough to help launch Nina Simone’s career with the unforgettable ‘Ain’t got no, I got life’. These do not disappoint, causing energy in the auditorium that explodes at the final blast of ‘Let The Sunshine In’. Galt MacDermot’s songs have permeated into the popular consciousness for a reason and the cast’s vocal ability to invest these songs with passion is beautiful.

And what a cast! Clad in their best hippy clobber the production dares you not to love it. Jake Quickenden (a real-life celebrity) does well as the sex symbol Berger: wearing nothing but a very small thong for a lot of the show he provides effective, if slightly obvious, gags. The singing tours de force are without a doubt Aiesha Pease, playing Dionne, and Daisy Wood-Davis (of Hollyoaks), playing Shelia, who provide vocal skills that would make most singers blush. Wilkins’s Claude is rather bland despite a good voice. Playing the lead it’s a shame as he is overshadowed by most of his fellow cast members. However, it most certainly isn’t the singing that causes this musical its problems as the songwriting genius and vocal competence work very well together.

Hair is a strange creature, both commenting on and ultimately coming to represent the “love-soaked” 60s. It is filled with rousing songs and a message of love that at that time had all the potential of radical change. Celebrating the recent lack of censorship laws in the late 60s with open sexuality, profanities and inclusivity, there’s a lot of good. The question is how this musical fairs in the current climate. Although this production tries all the tricks to appeal to a modern audience the lack of overall cohesion is difficult as the show manages to say nothing new. Mentioning Trump at the very start in a voice-over does not a poignant message make! The show is an enjoyable experience, colourful and acoustically dreamy, yet its counterparts in theatreland manage to achieve this and much more. I am not sure if Hair fits within a world where its alternative views have become consumed by the mainstream. Like the characters, the audience are lost in a psychedelic haze.

Hair is touring until the 10 August.