Shit-faced Showtime: Oliver with a Twist 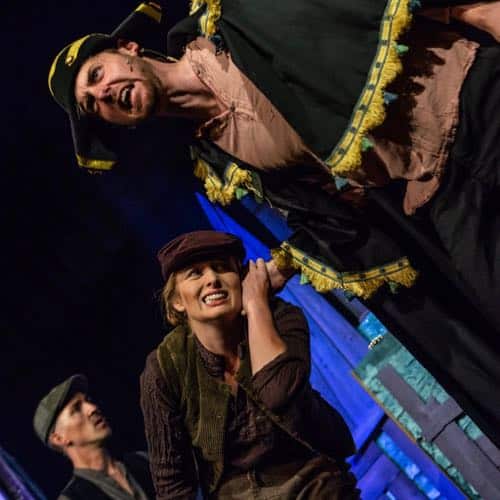 Shit-faced Showtime: Oliver with a Twist continues at the Leicester Square Theatre, London until 12 April 2019.

Leicester Square, Victorian squalor, musicals, and one very inebriated performer – Shit-faced Showtime is making waves with its brave (and boozey) concept. Oliver with a Twist is the recent gin-soaked adventure and although the hilarity of the concept is a constant, the overall effect is less than euphoric.

Creating a reputation by tackling Shakespeare with the same alternation of a sauced actor (luckily never the same one in a week) Magnificent Bastard Productions has begun to make a name for itself. Although the company’s recent show is an interesting addition to its body of work, it doesn’t quite measure up. A more strict and serious play would benefit from the chaos caused by the drunk’s lack of ability to keep the charade going effectively.

Unfortunately, some musicals (especially Oliver!) already have a camp, light-hearted feel in sections. So although Katy Baker (our night’s Wineo, director and writer, talented much?) brings a clown-like ability for carnage, the silliness bleeds out from her and infects the whole cast. If the whole concept rests on the chaotic influence of a smashed performer, the other actors must provide the skill and juxtaposition of utter professionalism or else most of the comedy is lost. Although the story of poor orphan Oliver and his journey through the underbelly of London fits very well with an alcoholic theme, the production’s messiness is not concentrated in the place it should be.

In the show’s favour, it is very, very funny. The perfect aperitif to a night out, the best way to start your own heavy evening. Baker’s drunken ramblings and almost accidental reinvention of Nancy as a dominating, intimidating character is very enjoyable considering her downtrodden and ultimately heart-breaking fate in the original book/play/film (no need for a hanky this time folks).

Mixing a selection of songs from Les Misérables, My Fair Lady and Oliver!, the only real standout song is Baker’s amazing performance of ‘I Dreamed a Dream’ (who knew we needed a slurring Fantine singing to a toy dog!).

The pandemonium at the end of the show as Baker’s progressing drunkenness is helped by the audience’s participation (honk the horn if she’s sobering up) is hilarious and makes us feel complicit in her revelry. Some of the performers are able to work around the sudden changes of script and plot brought on by Baker’s inexplicable whims. Issy Wroe Wright (playing Oliver) manages to translate the action into something almost resembling a plot, but overall the inability to improvise leaves rather uncomfortable gaps and muddled sections of dialogue.

This incarnation of the Shit-faced Showtime lands rather uncomfortably, Amusing, enabling, but the gold mind of disruptive comedy is lost within the murky red wine-stained depths. A logical progression for a nation of binge drinkers, it’s not the concept that is to blame here (at least not in a theatrical sense). Ironically it’s the sober elements within the cast that cause this dipsomaniac production to stumble.

Although a rip-roaring time is had by all, this lethally mixed cocktail of a production does more damage than good.