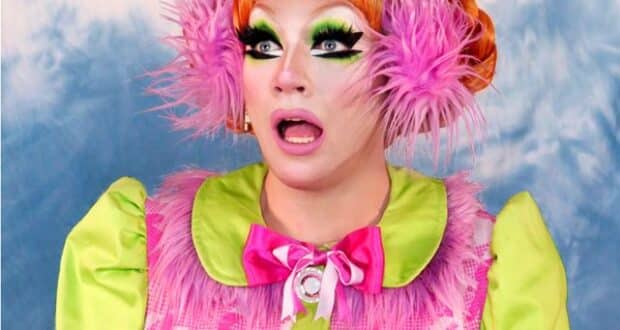 After months of isolation Ginger Johnson pulls us out into the stage lights with a festive evening of songs and salaciousness. After all: ”What good is sitting alone in your room? Come hear the music play. Life is a cabaret…”.

And hasn’t this year just been the chaotic, unnerving cocktail of good and bad (mainly bad) that cabaret is known for? But thrown open are the doors of the Pleasance Theatre Trust and we step with wild uncut hair, Netflix-squared eyes, and mask clamped over our faces, into their new Covid-safe venue.

In the centre a large circular stage is set well away from the tables, the whole affair reminiscent of the Kit Kat club if it was moved into a barn in North London with no heating and an over-fondness for perspex screens. Booze and pizzas from the restaurant below are ordered throughout the performance and delivered by masked waiters, the whole evening taking on the feel of a space-age bar 500 years in the future.

Safe, filled with beer and carbohydrates we are ready, but for what?

The eponymous star Ginger Johnson erupts onto the stage in a domed ginger wig, following the saying “the higher the hair the closer to God”. All grit and glamour this northern drag queen is the heart and soul of the show. singing in a smooth-as-cream-in-your-coffee voice, pouring hot scalding sass on anyone close enough, and keeping the other performers in line as the ragtag acts vary in energy.

She is everything I love about drag; cruel, loud, crass, and most of all, in charge. Trying to tell the story of the Christmas Egg, Ginger breaks into hilarious original songs, along with less interesting covers. Sarah Bodalbhai keeps pace on the piano and adds clever improvised sound effects.

Speaking of improvisation, the section that really zings is when the audience is asked to write questions during the interval for Ginger to solve (agony aunt style). During a proposal, family feud, and various sexual questions, Ginger attacks, screeches and berates the audience members, bullying, punning, and breaking hearts: it’s wonderful. Always ready with a quip, always prepared for an insult, Ginger would be just as much at home verbally (or physically) tackling hecklers in the Admiral Duncan as on stage in the theatre.

But we can’t just talk about the Johnson, can we (sorry blue humour was rather a theme)? Unfortunately, the ‘guests’ that regularly interrupt the story of the Christmas Egg pale in comparison with this multi-talented juggernaut.

Strange Boy provides some hilariously awkward characterisation, with repulsive but impressive sword swallowing and nose work (you’d have to see it to believe it). Maxie More although looking stunning in a green wig and crochet dress pulls the energy down with a monologue filled with facts about numbers read from her phone (really?). Mahatma Khandi gives a spirited dance number and lip-sync twice in the show and although looking every inch of perfection doesn’t know the lyrics well enough to truly wow.

As regards being unprepared, Mairi Houston is visually on point with Dita Von Teese’s style, yet her rendition of Jason Robert Brown’s ‘Surabaya Santa’ from Songs for a New World is off-key and laboured. It is a difficult song and a later cover is much better vocally, if rather out of place in a cabaret.

Lastly, in a glorious outfit, the drag pioneer Lavinia Co-op delivers some jokes that she sadly reads off a clipboard, before doing an admittedly amusing poem dressed as the Virgin Mary (thankfully without the clipboard). Although her style of drag is a little antiquated for a current audience, and the later songs are rather childish there is a charm in her stage presence that can’t be denied.

Throughout, Ginger keeps the ball rolling, moving between comedy bits, hosting, audience participation, to a final heart-breaking rendition of Joni Mitchell’s ‘Blue’. The evening is equally fun and painful. It is wonderful that the Pleasance Theatre Trust is open once again, and their solution to governmental rules is elegant, but with the overall disappointing nature of the acts maybe just give Ginger her own cabaret next year?