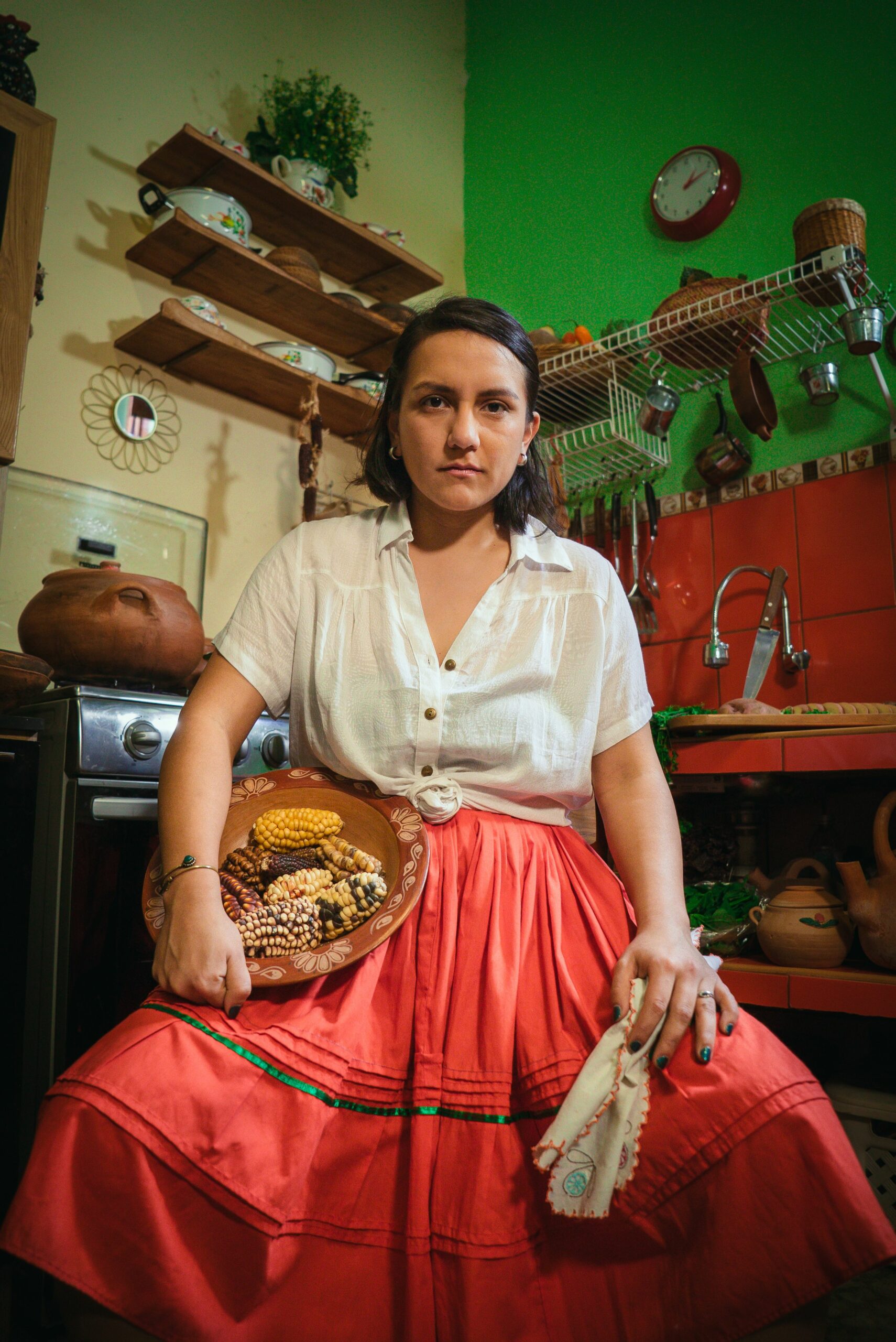 Food, a blessing, or a curse? functional or aspirational? Transcendent or transient? Sat at home demolishing a big bag of crisps I wonder…But as a gateway to your heritage, and a link to the past?  Now you’ve got me sat up straight, orange-dusted hand removed from the packet, intrigued.

“am I fat?” straight in, Pepa Duarte, writer and solo performer challenges us (the digital audience). Delving into her complex relationship with food, and through that her Peruvian heritage this autobiographical show is a mouthful (if only that was my last food pun).

The black box stage is decorated by a curtain of cooking implements and foods screening the back wall, a rather unimaginative set by Laura Arroyo. Two tables, one with a pot and cooking equipment, the other with Duarte lying prostrate as the lights come up.

What follows is well written, energetic, deeply personal yet at times technically limited. Duarte’s ability with muti-rolling is impressive as she embodies both her pregnant mother and her grandmother. The themes of the show are equally gripping. A South American matriarchal history from an expat living in London, gazing back over the sea of both time and geography.

There are truly delicious (told you) moments. The simple act of cooking a meal on stage for one, also a sequence of calorie counting where she writes in chalk on the floor encapsulating the obsessive nature of dieting culture. Equally learning about history through food and talking openly about struggling with societal pressure around body image and nationality. With swift transitions and absorbing dialogue, Sergio Maggiolo’s directorial style keeps the piece bounding along.

There are however moments that taste a little tart. Applecart Art’s recording could have been better quality, as the whole sound effect is rather tinny. The audio crackles at moments of intensity and is too quiet at moments of hushed reflection. Digital Theatre is an emerging market and there are teething problems, but improvements need to be made on the technical side.

Performances wise Duarte does slip at points into melodrama and occasionally stumbles over her lines, although neither detracts from the overall sense of the show. Lastly, although the show is interesting the inward focus could have worked in more history and widened its gaze. Biographical shows have been popular for many years within the experimental theatre industry so it can be tough to set yourself apart, Eating Myself has some work to do in that department.

The journey of this show mirrors the 2020 experience, cancelled physically various times the digitalisation of the show is a testament to the passion of those involved. I was desperate to smell the cooking dish, hear the missing laughs of the audience, and be in the room with Durate. Nevertheless, I am grateful this work was not another sacrifice to the burning rubbish-bin fire that has been this year.

The bittersweet final image of Duarte asking us to join her for a meal, knowing full well we can’t smacks of sad irony, yet the sentiment remains. Revelling in the joyful ritual of sharing food, we are left with a final dollop of wisdom “I’m made of these flavours” as the steaming pot illuminates her face and the room fades to black.

2Recorded by and at Applecart Arts